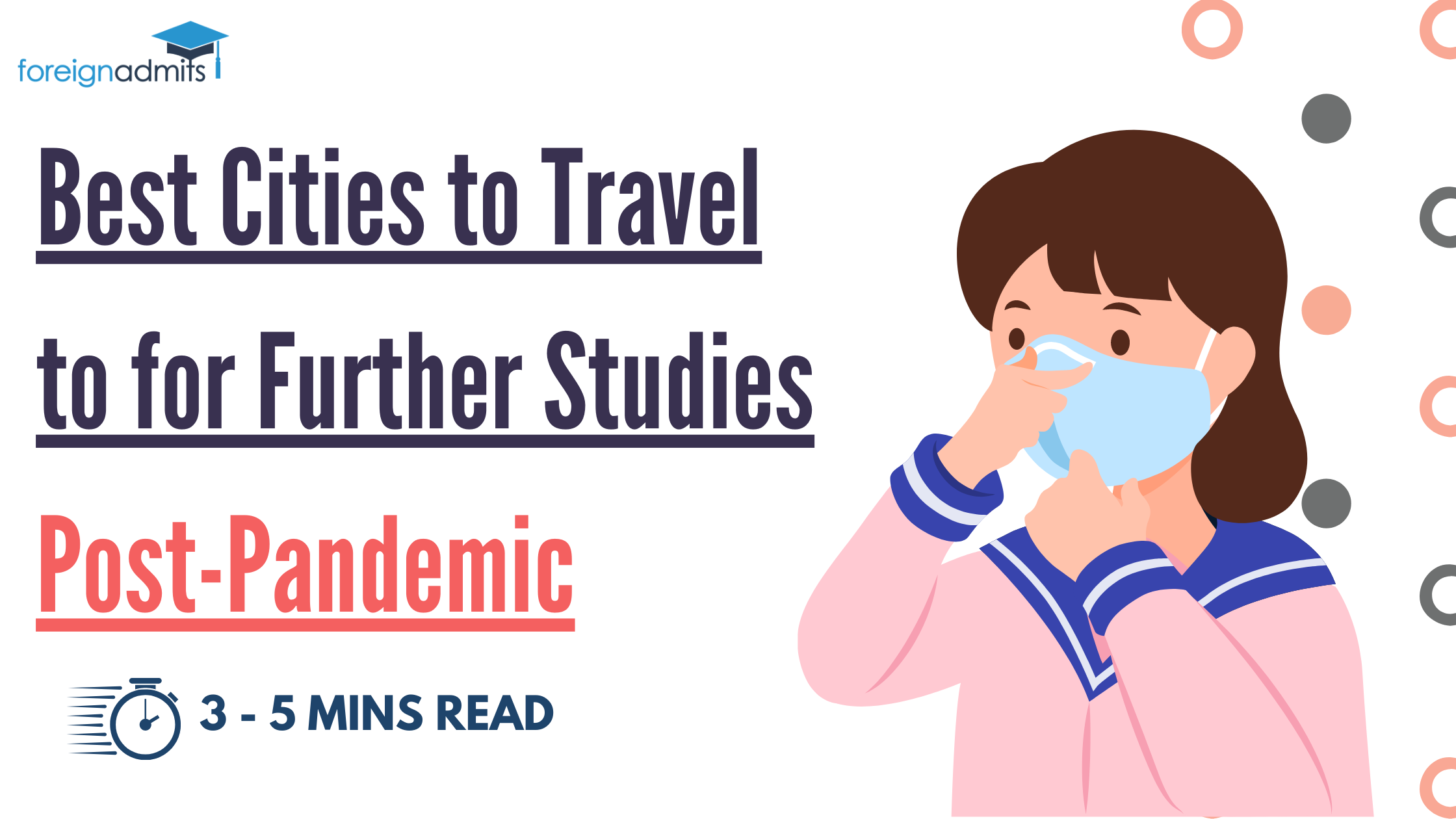 If your academic career is starting to feel routine and uninteresting, it’s likely because you’ve been missing out on one of life’s most refined experiences. Studying abroad ranks alongside significant life events such as marriage, homeownership, and the birth of a child. Do you wish to know the best cities to travel to for further studies post-pandemic?

Don’t be surprised if you take more photos throughout your semester abroad than you did during the first six months of your firstborn’s existence. The remarkable moments you have while immersed in strange odors and sounds halfway around the world have a unique capacity to transform your viewpoint, grow you, and teach you lessons you won’t learn anyplace else.

There aren’t many other occasions in life when you may get lost in unfamiliar subway systems, meet strangers who will become lifetime friends, and make embarrassing cultural gaffes all in the same day. All of this can be a watershed moment in your life and a mind-blowing event. We’ve produced a list of the five best cities to travel to for further studies post-pandemic.

London is currently one of the most sought-after destinations for international students. So if studying in one of these magnificent, in one of the jaw-dropping cities isn’t enough to persuade you, we thought we’d give you some insight into this lovely city. When you study in London, you will be at the heart of the essential areas to direct your educational needs. There are numerous libraries, local companies, and assistance networks that could help you as you seek your education.

London provides many lively and energetic gathering spaces for all ages, whether you’re a graduate student or a working professional. Suppose you have an appreciation for architectural beauty. In that case, you should visit the well-known King’s Cross Station, or if you have more time, you can also pay a visit to The Lloyd’s Building and The Jewel Tower to admire its structural aesthetics.

Finding suitable student accommodation in London can be a tedious endeavor, but one should not take it lightly. Several student halls in London offer uber affordable services. Many of the world’s most prestigious universities, including Imperial College London, University College London, King’s College London, and the London School of Economics and Political Science, have student dormitories in Central London.

With a student population of over 70,000, Liverpool is one of the most popular student cities in the UK. Liverpool is noted for its low living costs, affordable housing, and diverse entertainment options. It is home to a vibrant student nightlife. It’s a famous city with numerous well-known sites. These include The Liver Buildings, The Beatles’ homes, and the historic docks, which will all become familiar to visitors.

Liverpool’s noble cultural heritage, which dates back to when Liverpool was Britain’s second-largest city, is a source of justifiable pride for Scousers, named after Scouse, a fish-and-biscuit stew popular with sailors. However, what inspires them the most is the ongoing program of urban restoration that is transforming a once-ruined city center into one of the most attractive cities in the world.

Moorfield, which is only a few miles from the universities, is the most convenient and accessible student housing in Liverpool. Byrom Point, Liverpool, and Plato House, Liverpool, are two other options for renting rooms. Both are reasonably reasonable and give the best living facilities to satisfy your demands.

Dublin is a magnificent island with a diversified natural habitat, charming forests, historic cityscapes, and modern cities. Ireland is a beautiful country that combines adventure, history, culture, and entertainment.

Dublin’s international reputation for high-quality education stems from an unwavering commitment to excellence. Despite being an island country, it has many international students, making it a popular choice. Ireland boasts one of Europe’s best educational systems. It is characterized by creativity, efficiency, and pragmatism, as well as strong ties to industry. Education has played a vital role in making Ireland one of the world’s fastest-growing economies during the previous decade.

Manchester is one of the most well-known student cities globally, attracting both international and domestic students. What, on the other hand, makes Manchester such a great student city? Over 80,000 students choose Manchester as their destination of study each year.

If you want to study in Manchester, you’ll be in good company, as the city has many international students. It’s comforting to know that a city has a large student population because it means it has good universities and something to sell! Manchester graduates have gone on to achieve incredible success.

Manchester University has risen to the top five places to work for top graduate firms. It’s pointless to spend three to four years in university if you’re not going to get a job afterward. According to current data from The University of Manchester, 94% of full-time first-degree graduates in the United Kingdom were employed or enrolled in further education after graduation.

Best Career Options To Look Out For In 2021

Berlin, Germany’s capital, is an excellent choice for students, particularly international students. In this booming metropolis, everyone will find something to their liking. For cultural and art lovers, every nook of the city is alive with innovation. For party animals, the town is dominated by pubs, bars, and nightclubs.

Exploring Berlin is an excellent way for nature enthusiasts to take advantage of the city’s atmosphere. In addition, Berlin is known for its low cost of living compared to other European cities and its abundance of recreational opportunities. This makes it appealing to students with limited or changing incomes. Germany is the second most cost-effective country to study in.

This is due to students’ numerous privileges, such as free transit across the city and discounts at various stores, galleries, and libraries. As a result, compared to other European cities, Berlin’s living expenditures are low while maintaining a good quality of life.

How can Amberstudent help you?

At AmberStudent, we are determined to provide the best student accommodation experience and options available anywhere globally because we believe in the power. We have been actively developing our COVID policies and will also be eager to help you with them. We hope this article helped you with the best cities to travel to for further studies post-pandemic.