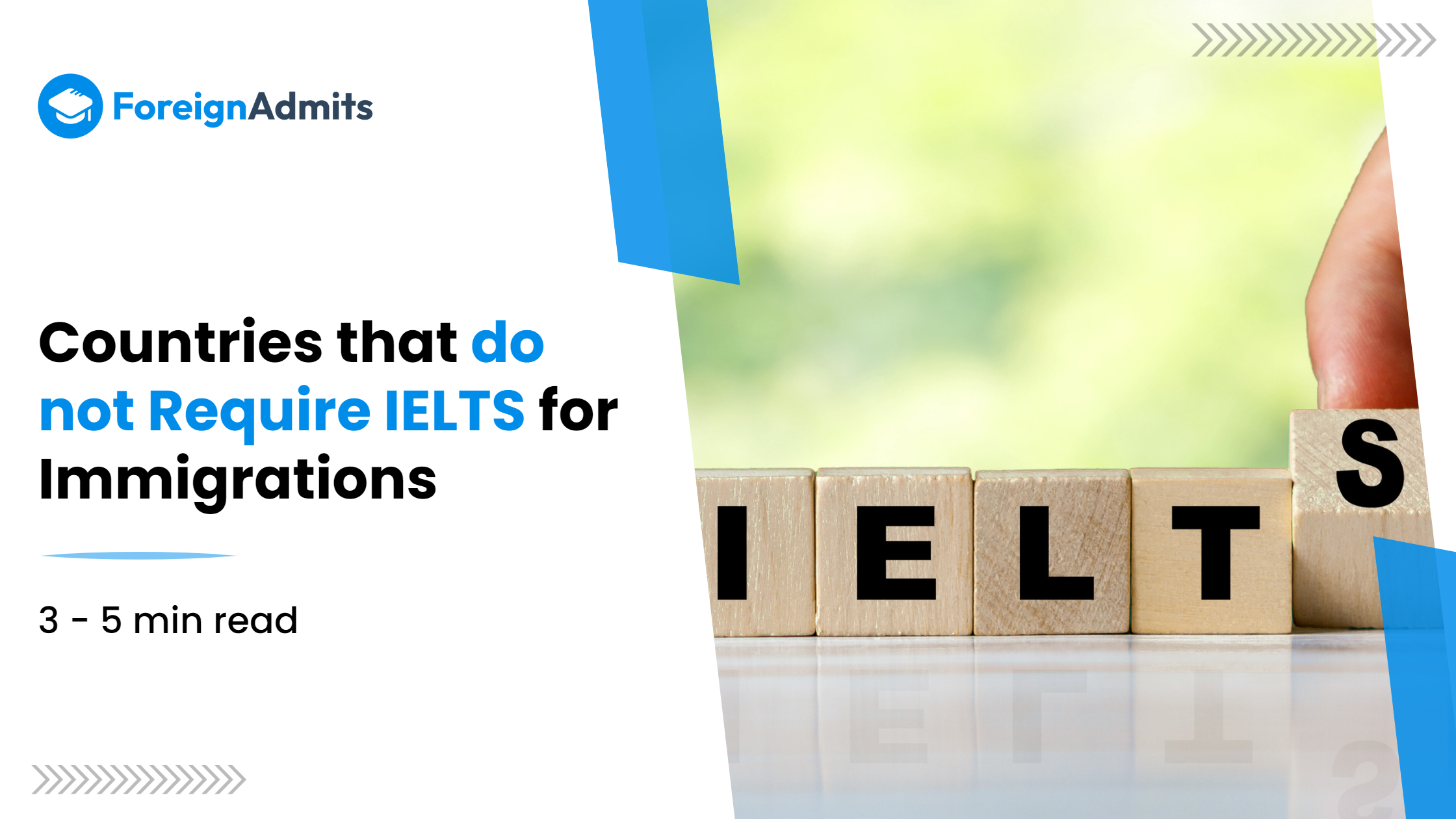 More and more students want to move out of their native countries for education and functional purpose in today’s world.

Each country, each college and each company have a different requirement for admitting students to, and even governments have different visa requirements.

In most European nations, proof of English proficiency is vital. Exams like IELTS, TOEFL (here’s a comparison) and PTE are mandatory to gain admission into the university.

MBA in Australia without GMAT

What is the IELTS exam?

The International English Language Test (IELTS) is designed to help you work, study or migrate to a country where English is the native language. This includes countries such as Australia, Canada, New Zealand, the UK and the USA.

It will further assess your ability to listen, read, write and speak in English during the test. IELTS is graded on a scale of 1-9.

These are some of the details of the IELTS exam:

Countries not requiring IELTS for immigration

You can gain a visa and migrate to some countries without an IELTS score.

However, you do not need to undergo this exam if your first language is English.

Below is a list of countries that do not need an IELTS score:

Because of India’s technological advancement, a growing number of students are choosing to study in India.

Many universities in Canada do not require students to have IELTS scores. Well, this is mainly for students who hail from countries where English as a primary language.

Alongside this, Canada follows a strict admission process for students who do not have an IELTS score. For instance, if you attended a school or lived for the last four years where English is considered the primary language of instruction, you cannot give language proficiency proof.

To gain a visa and migrate to Australia, you do not need to have undergone this exam. However, some universities might require some other proof of English proficiency.

Many universities in Australia accept students without IELTS score for both undergraduate and graduate programs.

Usually, students who apply to study in Germany do not need IELTS or TOEFL if they have a bachelor’s degree, which was taught in the English language or their native language.

Besides, some universities just require a letter from the student’s college to verify English Language Proficiency.

However, for instance, in Freie Universität Berlin, there are specific language requirements for different programs. In a program like English Philology, you must have passed a language test. Asides from this, many universities in Germany are places you can study without an IELTS score.

Study in Australia without IELTS

Malaysia is the 11th most preferred study destination and a top country in Asia after Singapore to study in, and one of the countries IELTS is not required.

There are excellent Government Universities like the University of Malaya, University Sans Malaysia, etc. It also has campuses of many top Universities across the globe like Monash and Swinburne (Australia), Nottingham and Lancaster Campus (UK), etc. At these universities, you can study without having an IELTS test score.

Here, IELTS is not a compulsory requirement to study both undergraduates and postgraduate courses and work.

However, international students are to check their courses’ requirements in the desired university before they apply. They may be lucky to find some courses free from TOEFL/IELTS requirements.

What is the alternative to IELTS?

The alternative to English language proficiency tests is Pathway programs. This pathway program is a preparatory course that helps international students build the skills, knowledge, and qualifications that they will need to enter a bachelor’s or master’s degree program. The programs generally last one academic year, and they do not end with a degree.

A pathway program allows international students who want to study abroad to take English as a second language (ESL) courses while also taking courses that will count as credits toward their degree.

Many universities in various countries, such as Germany, the USA, Australia, provide pathway programs for students who wish to pursue a course in their desired university.

Hence, we hope we could help you know which countries do not require an IELTS score for getting a visa and studying or working there.

ForeignAdmits provide you with world-class mentors and counsellors from around the globe. Make full use of the opportunities coming your way and contact our mentors for expert opinion and professional help.

Q1. Can we study abroad without taking IELTS exams?

Ans. Applicants who wish to study abroad without an IELTS must provide proof of academic certificates indicating that they learned English as a subject in school.

Ans. The IELTS 2022 exam is necessary for academic and migration reasons in English-speaking nations such as Australia, the United Kingdom, New Zealand, the United States, and Canada.

Q3. Is it possible to immigrate to Canada without giving IELTS exam?

Ans. As certifying English language competency is required, the only way to come to Canada without giving IELTS exams is on a short-term basis, i.e., Canada’s visiting or working visa. Furthermore, for getting a legal resident, you should be able to converse in English with the employer, neighbours, doctor, and others.

Q4. Can we acquire a visa if we don’t have IELTS?

Ans. Yes, you may obtain a visa without taking IELTS. You only need to provide documents from the university you’ve been accepted to that prove you’re qualified for a student visa without an IELTS.

Q5. Which nation is the best for studying without IELTS?

Ans. There are several wonderful nations that provide entrance without IELTS. To mention a few, they include the United States, Canada, the United Kingdom, Ireland, France, Sweden, Japan, China, and Italy. You can choose one depending on the programs and universities that are relevant to your ambitions.