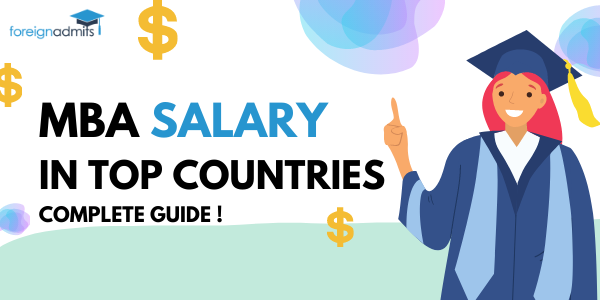 Many students choose an MBA because of its growing demand in the job market and generous MBA salary packages offered by companies. There are prospects of further growth in this department.  MBA salary levels are considerably higher in certain leading economies of the countries than they are in others.

So, here is a list of the top countries that pay a high MBA salary.

The demand for MBA from employers across the globe is high. North America is the best place to go as they pay a high-level salary to an MBA graduate. Graduates earned an average salary of 115,000 USD per annum .this could also be because business schools in the USA offer opportunities to work at reputed MNCs like Amazon and Google. Most hired graduates have a degree in strategy and innovation, finance, business intelligence and analytics, marketing, and consulting. This means MBA in any specialisation is more in demand in comparison to a general MBA. Moreover, the country annual average Salary in (INR) is 46 Lakhs to 14.45 Crore.

Studying MBA in Canada is also very affordable compared to other foreign countries. Six of the top 100 business schools in the QS Global MBA Rankings 2018 are located in the country. An MBA graduate earns 133,000 CAD per annum on average in Canada. Approximately 18 business schools of Canada ranked amongst top universities worldwide offering MBA, as per QS News Ranking for 2020. And the highest paying provinces in Canada are Ontario, British Columbia and Alberta. The country annual average salary in INR is 41.6 Lakhs to 12.16 Crore. Thus, it lists in the list for MBA salary in top countries.

According to the Global Financial Centers Index, Switzerland, the world-famous banking nation, Zurich, and Geneva are among the world’s top 20 centres for finance. It makes Switzerland a strong country in terms of finance. It also houses the headquarters for many of the world’s most influential companies, including Nestlé, the Zurich Insurance Group and Credit Suisse. Being the home country of solid banks, Switzerland offers an average salary of US$123,500 to an MBA graduate. The most paid job is of a financial analyst and the most required MBA specialisation in finance.

According to The QS TopMBA Jobs and Salary Trends Report surveys, the strengthening of the Swiss currency played a big part in this. Still, one of the main reasons for this is the relocation of much multinational company’s headquarters, away from London or Frankfurt, for example, to Switzerland to reduce corporate tax bills, which led to an increased requirement for MBA graduates country.

Australia was included in the list of top countries for MBA salaries in 2020 by QS News. It is placed in 5th place with 98,400 USD average salaries leaving behind countries like the UK, Singapore, and Germany (77,200). Five of the business schools in Australia have been ranked among the top 100 business schools globally, as per QS Global MBA Ranking 2021.students are generally offered positions in managerial roles after MBA. Finance is the highest paid industry globally, with the annual salary of an MBA graduate being 97,100 USD (average), followed by technology and consulting. The critical factor is the competitive market, which seeks to hire the finest multinational MBAs from leading business schools across Asia. The country average annual salary is 48 Lakhs to 7.6 Crore.

MBA in Digital Finance And Banking

The business sector in the UK is growing strong every year. Graduates receive a salary of around 80,000 GBP or more per year after completion of the degree. The financial services industry in the UK has a high demand. According to the latest studies conducted by the Statistical Research Department, there will be over 390,000 job vacancies available in the finance sector in London alone by 2027. Financial analyst being top on the list. After MBA in Finance, HR is the second most employment sector for jobs in the UK after MBA. An HR professional working in the UK can expect an average salary of 32,948 GBP. At director-level positions, MBA-HR graduates can expect salaries upward of 70,000 GBP.

Singapore has most of its business location and is home to companies including DBS Bank and Singapore Airlines. It is the first Asian country to make a list due to its growing infrastructure and economy.  Moreover, some universities allow students to work for 16-18 hours a week and have pretty flexible norms to pursue the degree. An MBA graduate in Singapore is mainly rewarded with various managerial job roles. On average, the business schools in Singapore have placement records of around 90%. Students get placed in companies like Microsoft, Dell, Boston Consulting Group, and many more. With an MBA degree from NSU or INSEAD or the top business schools, you can get an average salary of 76,000 USD annually. The most common position is of Business consultant with an average annual salary of 83,900 USD

In Europe, Germany is the only country with the highest national economy, making it one of the top 10 countries to offer the highest paid jobs to MBA graduates in the nation. Mostly the international students that come to Germany for further studies are from India. The government is the home to big companies such as Mercedes-Benz, BMW, Siemens, Deutsche Bank and Bosch, which opens up exposure and opportunities for students.

The most paid MBA in Germany is in management, Finance, Human Resource, Project and Operations Management, etc. The highest-paid job is of consultant followed by finance manager and operations manager. However, the universities do not have campus placement services, and the most popular way to find jobs is through networking and advertisements. The country annual average salary in INR is 38 Lakhs to 12 Crore.

Hence, this was the list for MBA salary in top countries.

1. What are some of the best countries to study MBA Abroad and work?

Some of the best country to study MBA Abroad and work in are the USA, UK, Germany, Canada and Australia but choose the country according to your degree and job profile.

2. What are the types of MBA one can pursue abroad?

Apart from the general MBA, you can pursue an Executive MBA, Online/ Distance MBA and Part-time MBA. Moreover, there are various specialisations in MBA such as finance, operations etc.