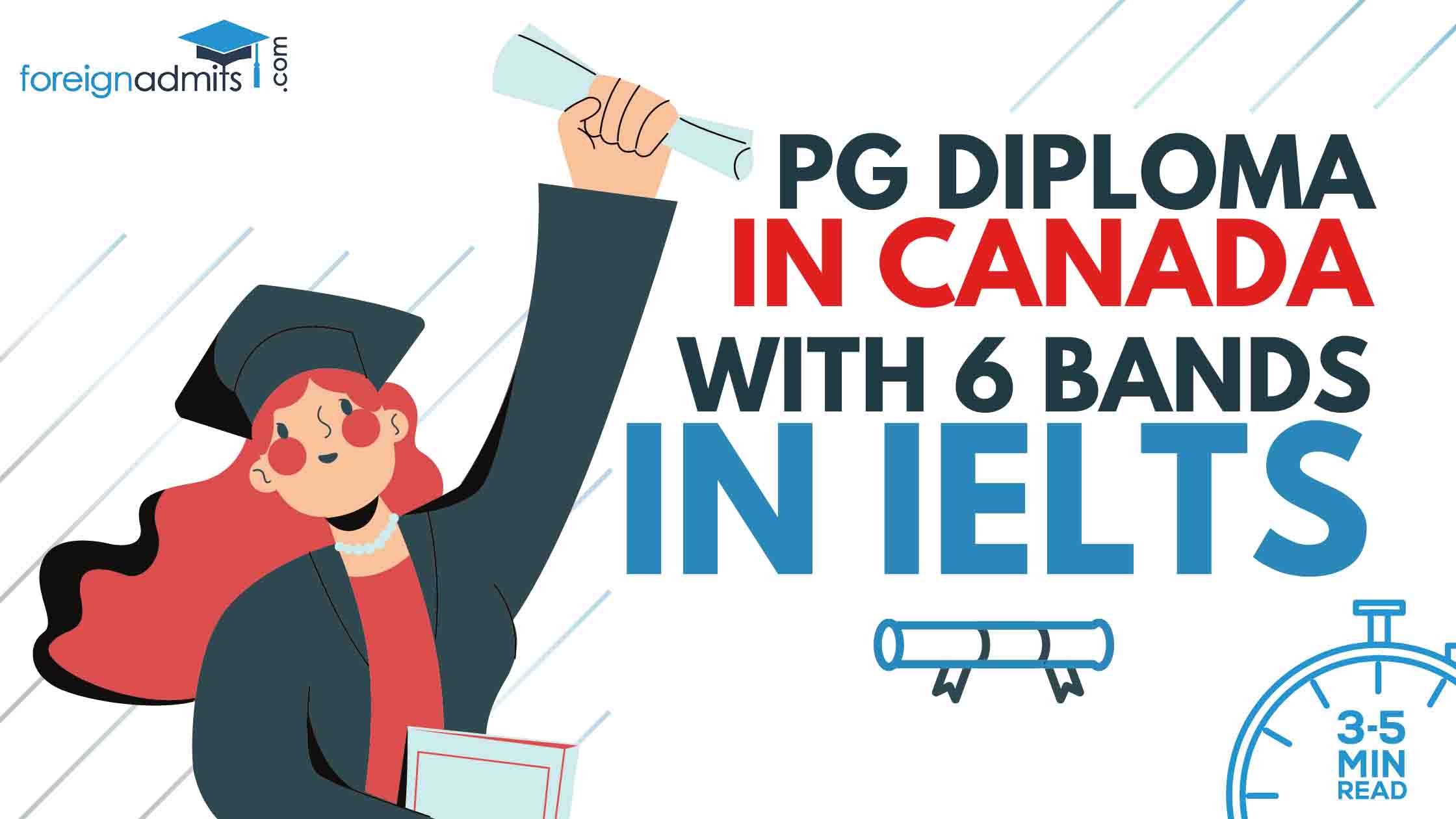 International English Language Testing System is a test for a candidate’s proficiency in the English language. The IELTS was established in 1989. And today it has become one of the major international English language tests for admissions abroad. Additionally, it is accepted by all European countries along with Australia, New Zealand, Canada, the United States of America, etc. Also, the test is targeted towards non-native speakers for admission into foreign universities and for immigration into the UK. Thus, if you want to pursue your higher studies in UK, Canada, USA then you need to write IELTS. This blog is specifically dedicated to PG Diploma in Canada with 6 bands in IELTS.

For admission into top universities in Canada and abroad contact us now at ForeignAdmits. We provide admissions, counselling, and mentorship for all students in India abroad.

Before moving on to the details of PG Diploma in Canada with 6 Bands in IELTS, let’s understand what’s IELTS.

IELTS was previously called by the name of Cambridge English Language Assessment (UCLES). Initially, the numbers of IELTS test takers were very low and around 10,000. However, today they have reached 1.7 to 2 million. Mainly the reason behind this is the number of students aspiring to continue their education abroad and the feasibility of the entire process.

IELTS tests the candidate’s ability to read, write, listen, comprehend, and speak English via the four-part test schedule. Therefore, the four parts of the IELTS exam are:

In addition, the total time allotted for the test is 2 hours 55 minutes. Visit the IELTS official website for more details.

The IELTS score is given in bands that start from zero to nine. Also, there are no qualifying marks in IELTS, rather you have to check the university where you are applying for the minimum IELTS score required for admission. Additionally, IELTS can be a computer-based or paper-based test. Usually, the test results of the computer-based IELTS are released within three to five days as opposed to the paper-based IELTS results that take a minimum of 13 days.

Lastly, there are two modes of IELTS; a general and an academic mode. Further, the test is held four times each month. Also, the 1200 test centres are located in 140 countries. The annual number of IELTS test-takers has increased to 3 million as of 2017. In addition, the validity of the score in 2 years but if the candidate has worked hard to maintain the level of proficiency then there is a possibility of an exception. Also, the fee for IELTS is $250.

Here are the most acceptable band score of IELTS for each country:

PG Diploma in Canada with 6 bands in IELTS

Canada is one of the best countries to study and live abroad. Firstly, there is a wide scope of jobs and further studies in Canada. Secondly, it is a multi-cultural and multi-racial country that openly accepts diversity and peace at the same time. In addition, it is less expensive in terms of cost of living, etc, than the UK and the USA. Moreover, the visa, admission, and immigration processing is easy and faster as compared to other countries.

Although usually for admission into top universities in Canada, you require at least a 6.5 and above score in IELTS. However, we have researched the best universities for PG Diploma in Canada with 6 Bands in IELTS:

Firstly, it’s the Concordia University is situated in Montreal, Quebec. It was founded in 1974 as a merger of sir William George University and Loyola College. Further, it is the largest university in Canada with an academic staff of 2400 and 46077 students as of the 2019 enrolment.

2. Fleming College for PG Diploma in Canada with 6 Bands in IELTS

Secondly, it’s Fleming College. It is also known as the Ontario College of applied arts and technology, is located in Peterborough, Ontario. Also, the college is named after Sir Sandford Fleming, who was a Scottish inventor and engineer. In addition, it has 10000 part-time students and 7000 full-time students. Further, there are 6 campuses of this college. Additionally, Fleming College offers more than 100 full-time courses in business, arts, science and technology, health and wellness, and continuing education.

Next on the list of PG Diploma in Canada with 6 Bands in IELTS is St. Claire’s College. It ranks as one of the top colleges in Ontario. It was founded in 1958 and it celebrated its 50th anniversary in 2015. Additionally, the college offers more than 100 diplomae, post-graduate, degree, and certificate courses in engineering, science and technology, business, community studies, health, media, and art and design.

New York Institute of Technology is a private research institute. It was established in 1955. Further, it has two main campuses in New York while some campuses and labs are located in China, UAE, Canada, and Arkansas State. Additionally, it provides bachelors, masters, and doctoral courses to more than 10000 students worldwide. Furthermore, it also partners with India, Brazil, France, UK, Costa Rica, and Germany for the international student’s exchange program.

5. Durham College for PG Diploma in Canada with 6 Bands in IELTS

In conclusion, there are many colleges and universities for PG Diploma in Canada with 6 bands in IELTS but we have mentioned the best of them. Moreover, if you have any queries regarding the admission process, feel free to give us a call at 8080679810 or visit us at ForeignAdmits.

Q1. Can I apply to Canada as a postgraduate student with 6 bands?

Q2. What IELTS score is necessary for a postgraduate diploma in Canada?

Q3. Is Band 6 a suitable IELTS score for Canada?

Ans. To be eligible for any immigration program in Canada, you must have an IELTS score of at least 6. This is similar to Canadian Language Benchmark (CLB) Band 7.

Q4. Is an aggregate IELTS score of 6 good?

Ans. It measures your proficiency in English Speaking, Reading, Listening, and Writing. So, if you achieved 7 or higher, you are considered a good user. If you got an 8, you’re a really excellent user. In addition, if you got 6, you are a proficient user.

Q5. Which countries can I visit with six bands?

Ans. At the moment, IELTS is accepted in the United States, the United Kingdom, New Zealand, Canada, and Australia.

At ForeignAdmits, we understand how important this decision is. We are here to help you every step of the way, from finding the right school to getting admitted and securing scholarships.

ForeignAdmits have a team of experienced counsellors. We can provide you with customized guidance based on your individual needs contact us today to get started. We look forward to helping you achieve your educational and career goals!