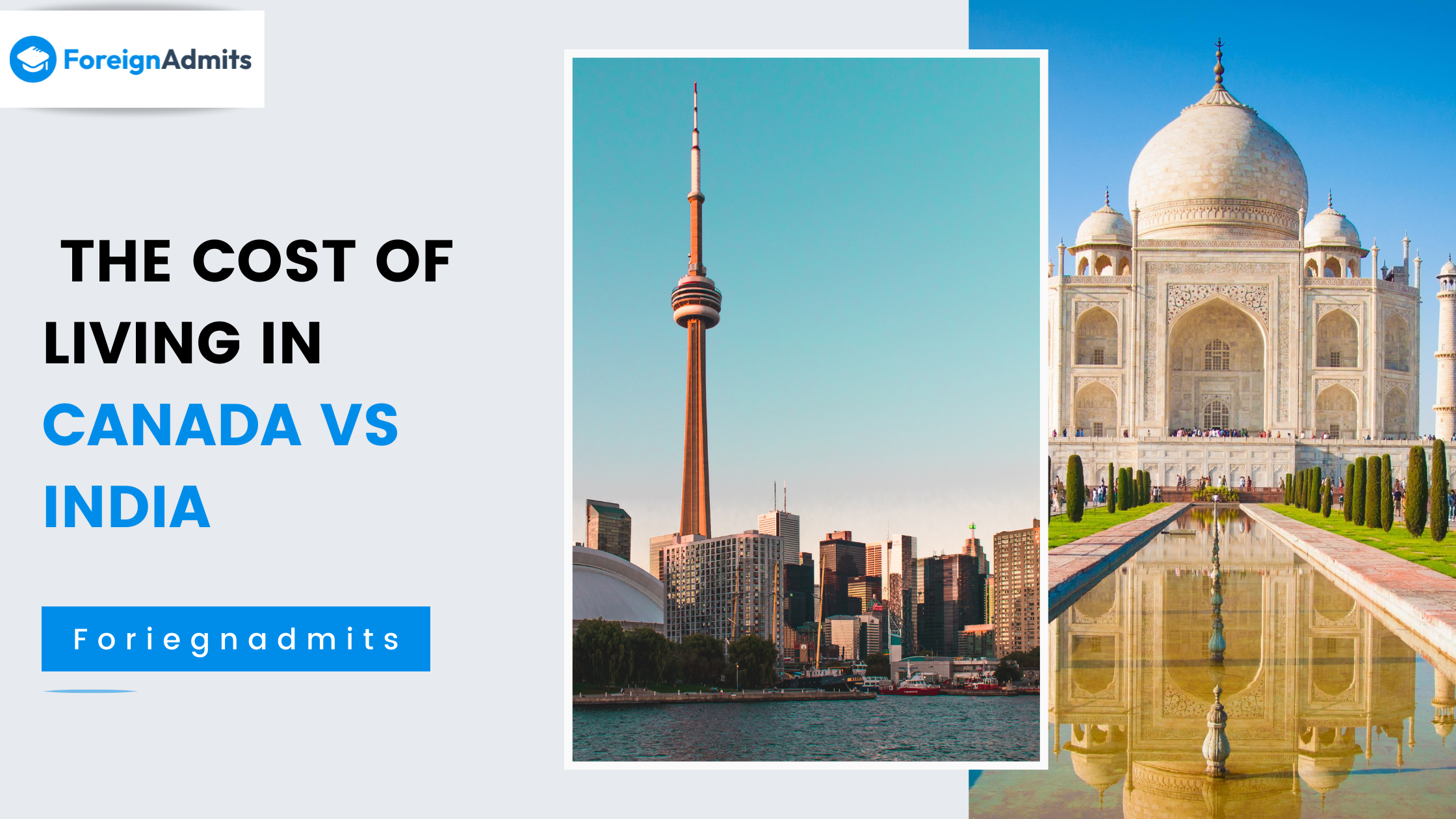 Moving abroad can be an attractive prospect for so many reasons. You can move to work or school. But moving is a massive step of life, especially if you’re moving to an entirely new country. Have you dreamt of settling in Canada but yet can’t figure it out because of the expenses? Here is a comparison of the cost of living in Canada vs India. Living in Canada offers a wide range of experiences. If you are willing to dive and pack the bags to move to the Land of Maple Syrup, then you will need to figure out the pros and cons of living in Canada.

Firstly, let’s discuss the benefits and disadvantages of living in Canada to approach your eyes wide open and then move to the comparison chart.

Study in Canada after 12th

Canada’s healthcare system is persistently ranked among the best in the world. The primary benefit of the country is that healthcare is publicly funded to all. About two-thirds of their population has private health insurance.

Canada has the 10th largest economy in the world, and it is known for its economic freedom. Canada’s employment market is as strong as the economy, and Canada’s unemployment is lower than in many other countries.

Canada stands 6th in ranking when it comes to the world’s safest countries. Its general crime rate has been steadily declining. Violent crime is rare in Canada, which makes it one of the safest countries in the world.

PG Diploma in Canada with 6 Bands in IELTS

The cost of living in Canada is generally high in comparison to other parts of the world. Taxes are pretty abrupt, and rents tend to be high, especially in bigger cities like Montreal, Vancouver and Toronto.

Canada’s immigration laws are pretty strict — it only allows in 250,000 immigrants and refugees each year. Wanting a work visa can be a lengthy and complicated process. People who immigrate to Canada have to pass through a rigorous process. In total, simply flying to Canada can be an arduous task.

University prices are a little higher in Canada, where many universities are subsidised by tax money. The university tuition fees in Canada can be pretty pricey, although it is not nearly as expensive as universities in other countries such as the US, UK, and Australia. According to the latest Statistics Canada report, tuition fees for international undergraduate students increased by an average of 6.3% for the 2018/2019 academic year.

The average undergraduate tuition fees per year are 27,000 CAD (INR 15,57,468). Arts and humanities are cheaper in comparison to engineering and medicine.

Cost of living in Canada vs India

Canada is generally a very progressive, diverse, and multicultural country. The cost of living in India is considerably lower than in Canada. Everything costs less, from local groceries to rent and real estate to education and childcare.  Of course, we all know that there’s bargaining, too, in India, which doesn’t happen in Canada. According to the researcher’s Cost of living in Canada, the comparative study is 168% more expensive than in India.

However, Canada ranks 2nd amongst the countries with the highest quality of life. The significant factors are the country’s robust education and universal health care systems.

The cost of education

In India, public education is free and compulsory for all children aged 6 to 14. Similarly, compulsory education starts at the age of 5 in Canada and continues until 16 or 18. Public education in Canada is also free, while parents only have to cover the cost of school supplies and extracurricular activities. Plus, Canada has the highest proportion of post-secondary graduates amongst the Organization for Economic Co-operation and Development (OECD) countries.

The average salary of recent immigrants is on the rise, and working in Canada can be rewarding. Despite the trend towards all things technology in today’s digital economy, not all Canadian jobs are tech. According to HR firm Randstad, the #1 in-demand role in Canada right now is that of a “general labourer.” This catch-all role encompasses everything from assembly-line jobs to working in one of the many warehouses and distribution centres opening in response to an increase in online shopping amongst Canadians.

Lastly, this all sums up the fact that every country is exceptional in its way. Canada and India are no different.  It’s essential to consider the immigration process before deciding to move to a whole other country and consider all the aspects, not just the financial side of things.

We further hope we were able to resolve any queries you might have had.

Q1. Is it affordable to live in Canada as compared to India?

Ans. The living expenses in India is substantially lower than that of Canada. Everything is less expensive, including fruit at the market place, rental houses and real estate, day care, or even mobile phones.

Q2. Is it preferable to live in Canada than in India?

Q3. Is it tough to live in Canada?

Ans. Life in Canada, along with everything else, will be difficult at first. However, when you’re more acquainted with the individuals, nation, and culture, the difficulties will gradually fade, and then you will manage to adapt into the country without you realising it.

Ans. The most appealing characteristics of Canada is its employment opportunities. Canada has always been a source of job possibilities, particularly for Indians. Each year, several Indians travel to Canada, mostly because this country offers the highest-paying employment in the world.