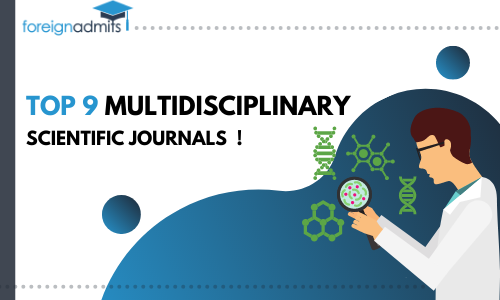 What is Multidisciplinary Scientific Journal?

In this journal, Research Articles, Short Communications, Technical Notes, Case Reports, and Clinical Cases from any knowledge area are published. They are periodical publications in academia intended to further science’s progress, usually by reporting new research.

In this article, we will list the Top 9 high impact factor Multidisciplinary Scientific Journals in academia.

It is a British weekly scientific journal founded and based in London, England. As a multidisciplinary publication, Nature features peer-reviewed research from various academic disciplines, mainly in science and technology. Nature is the most recognized scientific multidisciplinary journals in the world, Since 1869.

What Is Journal Citation Reports?

Science was founded by New York journalist John Michels in 1880 with financial support from Thomas Edison and Alexander Graham Bell. However, Science became the journal of the American Association for the Advancement of Science in 1900.

Science Advances is a peer-reviewed multidisciplinary open-access scientific journal established in early 2015 and published by the American Association for the Advancement of Science. In 2019, Science Advances surpassed Science magazine in the number of monthly submissions, becoming the largest member in the Science family of journals. The journal’s scope includes all science areas, including life sciences, physical sciences, social sciences, computer sciences, and environmental sciences.

Nature Communications is a peer-reviewed, open-access scientific journal published by Nature Research since 2010. It is a multidisciplinary journal covering the natural sciences, including physics, chemistry, earth sciences, medicine, and biology. Part of its scope is to fill a gap for high-quality, cross-disciplinary research articles with no dedicated Nature-branded journal available.

5. Proceedings of the National Academy of Sciences

It is a peer-reviewed multidisciplinary scientific journal. It is the National Academy of Sciences’ official journal, published since 1915, and publishes original research, scientific reviews, commentaries, and letters.

Is a career in analytics and research good for you?

Scientific Reports is an online peer-reviewed open access scientific mega journal published by Nature Research, covering all-natural sciences areas. The journal was launched in 2011. The journal has announced that its aim is to solely assess a submitted paper’s scientific validity rather than its perceived importance, significance or impact. According to the Journal Citation Reports, the journal has a 2-year impact factor of 4.011 in 2018 and a 5-year impact factor of 4.525.

7. Philosophical Transactions of the Royal Society A

Philosophical Transactions of the Royal Society A: Mathematical, Physical and Engineering Sciences is a fortnightly peer-reviewed scientific journal published by the Royal Society. All articles become freely accessible two years after their publication date. It publishes original research and reviews content in a wide range of physical science disciplines. Reports can be accessed online a few months before the printed journal.

8. Proceedings of the Royal Society

It is the parent title of two scientific journals published by the Royal Society. Originally a single journal, it was split into two separate journals in 1905:

The Purpose Of Research And Its Characteristics

PLOS One is a peer-reviewed open access scientific journal published by the Public Library of Science (PLOS) since 2006. The journal covers primary research from any discipline within science and medicine.