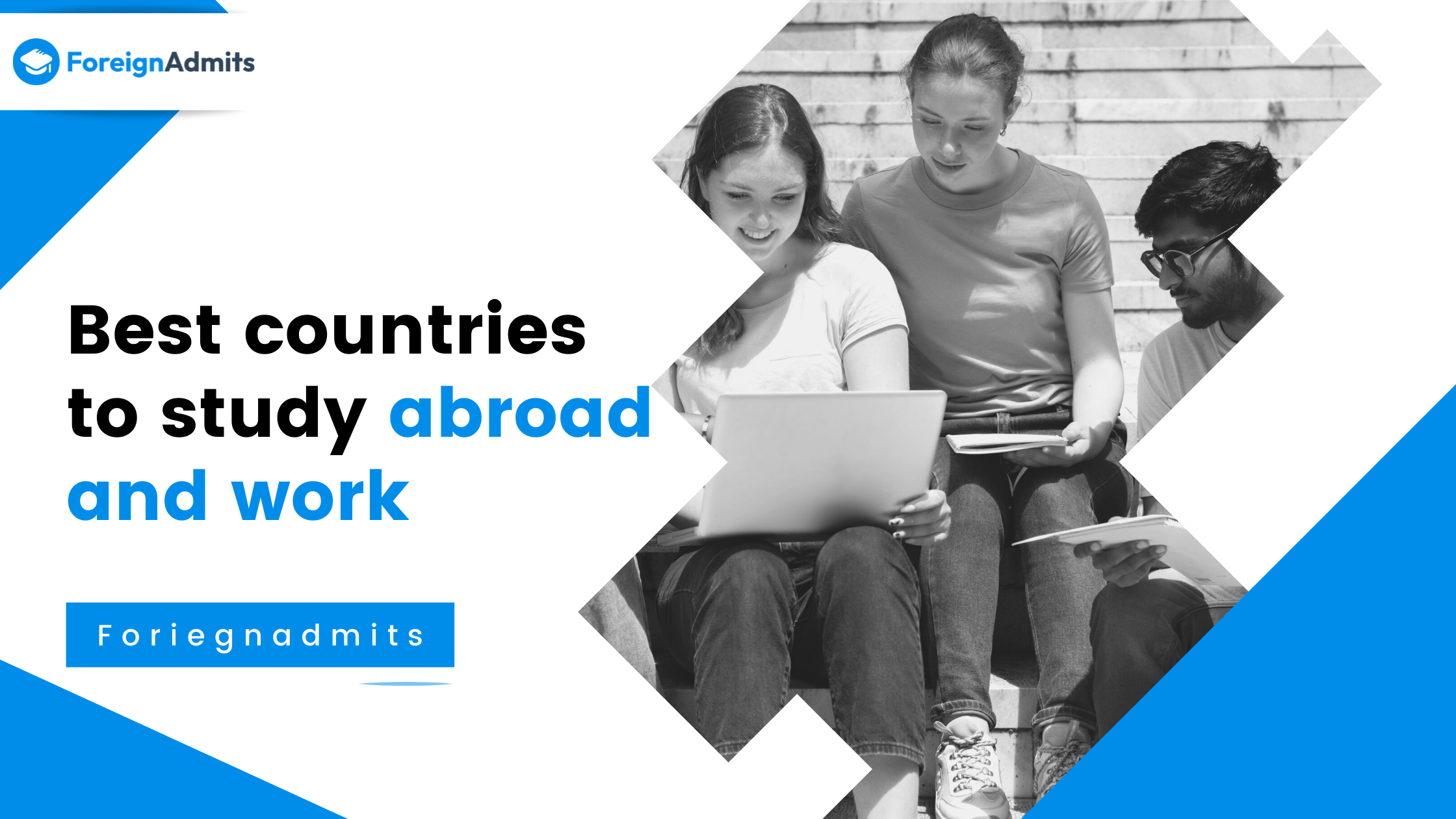 Studying abroad and making plans for the same can be overwhelming. You have to choose a country where it is comfortable and affordable with a promising career prospect in the future. The United States of America has some excellent universities, while Canada offers accessible residential permit, and German universities do not charge any tuition fees.

Keeping all this in mind, you have to decide for yourself and your career’s benefit. In this blog, we have the ten best countries you can opt for studying and then working.

It is famous for its top-ranked universities, a growing economy, and a student-friendly climate. Singapore is the ideal higher ed destination for international students. The country is a global leader in competitiveness and innovation and home to several universities, polytechnic institutions, and Institutes of Technical Education.

It has 34 universities, out of which six are national, and two are renowned for a world-class education.

While your tuition fee at a Singaporean university will vary depending on which university and program you choose, undergraduate tuition in Singapore costs 18,000 to 50,000 SGD. In contrast, the graduate tuition is 27,000 to 60,000 SGD. However, graduate courses in medicine can cost higher and may charge close to 70,000 SGD per year. Your cost of living, on the other hand, will range from 10,000 to 15,000 SGD.

Aside from the monumental legacy of Roman civilisation, Italy has a long history of leadership and innovation.

One of the best countries to study abroad and work in 2021, Italy is located in the southern part of Europe and is known for its lovely weather, delicious food, and beautiful settings. It is the fifth most populated country in Europe and has 34 internationally ranked universities. The tuition fees in Italy are affordable, especially in public universities. The tuition fee ranges from 850 to 1,000 euros; however, these fees are higher in public universities.

The Italian government also offers regional and national scholarships between 5,000 to 12,000 euros to help students with the cost of their education.

The average cost to study in Italy is around 200 to 300 euros per month. The student residence halls cost about 200 per month, renting/sharing flat prices around 400 a month. However, there are other options like staying with a host family or living in a youth hostel which is the cheapest option.

The Netherlands, also commonly known as Holland, is one of the most sought-after international students’ destinations. Situated in Europe, alongside significant countries such as Germany and Belgium, Holland is famous for its impeccable education system. It is primarily known for its management, business, engineering, and technology programs. If that, and boat trips on canals, lazing on beaches, and cycling around the Dutch neighbourhood sound exciting to you, studying in the Netherlands might be just your right choice.

The United States has dominated the global education arena for decades. The country is home to Ivy League schools and some of the top universities around the globe. 12 American universities rank among the Top 20 universities in the world based on QS rankings for 2019. These institutions offer a wide range of degrees and courses that are recognised and accepted worldwide.

Ireland universities specialise in courses related to natural sciences, technology, economics, and humanities. The country has seven universities, seven colleges of education, and 14 Institutes of technology for you to choose from. Out of these, five institutes rank amongst the top 500 universities in the world.

Do Grades And Institution Matter If You Want To Apply Abroad?

One of the top study abroad destinations for several reasons, the United Kingdom is a culturally diverse and welcoming place. UK universities consistently rank among the leading universities globally, offering a wide variety of specialisations and connecting you with a thriving alumni network. Not only that, but the universities here also mentor their students by providing broad support and offering financial aid.

New Zealand might seem like a small island in the Pacific Ocean, but it’s so much more than that. Ranking high on the Global Peace Index, New Zealand offers a relaxed lifestyle and a perfect balance between modern life and beautiful nature. Not only that, but it also has a thriving economy. The country is known for its unique, hands-on learning approach and its opportunities to international students. This is why all the eight universities in New Zealand rank amongst the top 500 institutes of the world.

Additionally, the cost of living in New Zealand will depend on your lifestyle and which part of the country you live in. But if you’re planning to study in New Zealand for less than a year, you should have at least $1,250 for each month of your stay.

One of the best countries to study abroad and work in 2021, Australia has a lot more to offer than just kangaroos, koalas, wide-open spaces, and beautiful beaches. Its friendly, laid-back nature and high standard of living are reasons why studying in Australia is a choice made by many international students. Another important factor that motivates international students to learn there is Australia’s education system.  Out of the top 100 universities in the world, eight of them are Australian universities. The country’s education system also focuses more on research-based work, making students study there to think outside the box.

Things You Should Know While Planning to Study Abroad

Known for its scenic beauty and high standard of living, Canada is also the world’s most educated country. It is quickly becoming the top destination for international students because of its quality education and low tuition fees. You will find that the universities in Canada do fantastic research and provide an excellent study experience. Canada is also one of the most diverse places to live in, and it welcomes students from all over the world. What’s more, it’s one of the very few countries that provide international students with job opportunities after graduation!

Studying in Canada is cheaper than pursuing your education in the US, the UK, or Australia. While the cost of learning subjects like Arts and Humanities can be around CAD 13,500, universities charge international students an overall amount of CAD 17,300 on average. Programs in the fields of Medicine and Business can cost about CAD 50,000. However, if you’re studying Engineering or Architecture programs, the fee will be relatively less than that.

We hope we were able to resolve any queries you might have had. For any further questions, do get into contact with our counsellors here at ForeignAdmits.

Ans. If students don’t enough income, they can seek some decent foreign scholarships. It is a simple method to avoid having to take out loans for your further education overseas. Also, you can apply to nations that are more cost-effective or economical, including Canada or Germany.

Q2. Is it simple to obtain a student visa to Canada?

Ans. Since many students have faith that getting a letter of admission is one of the most difficult fundamentals of the pre-study overseas process, getting a student visa can even be more tough. However, it is not rare for a student’s request for a Canadian visa to be denied.

Q3. Is there an age limit for studying in Canada?

Ans. You must be at least 18 years old for studying in Canada. Although there are no age restrictions for acquiring a Canadian student visa, you must acquire a study permit, in case you are a minor.