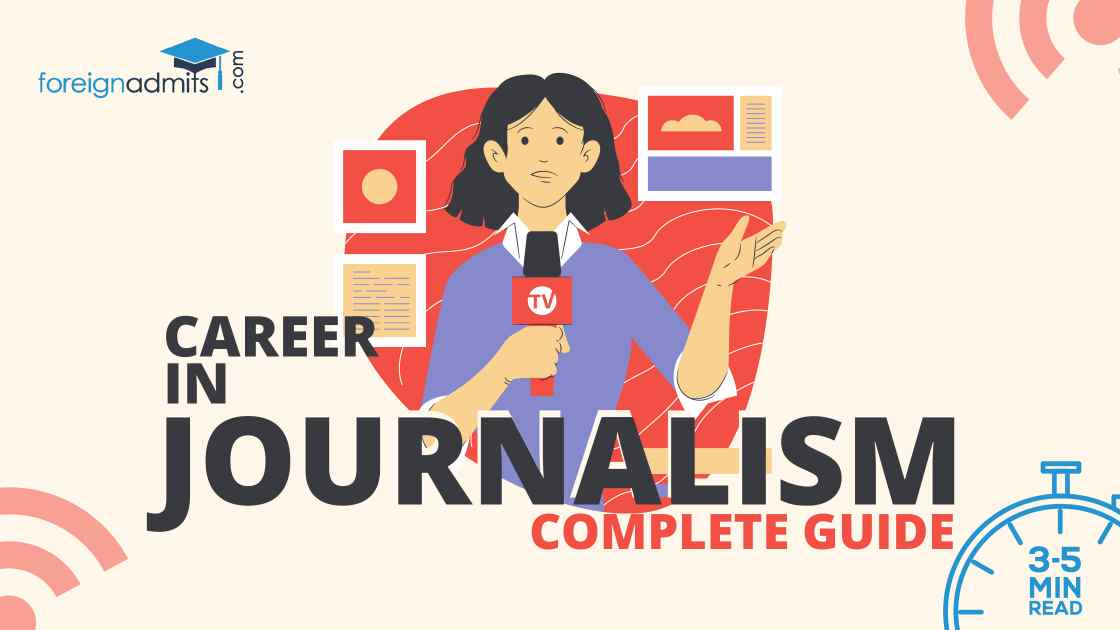 People around the clock continue to catch up with the new updates and innovations occurring around them during today’s age of connectivity and tech. This is what is involved in the Career in Journalism.

Journalism’s role is to spread awareness about any important incident in the world. The Internet has further recast the way journalists used to convey news in newspapers, radio, television, and, most recently, new media. In this practice, journalists have a vital part to play.

Today, as a job, journalism is not only an attractive profession but also a demanding career choice. Besides, journalists play a key role in the growth of any nation. Above all, Journalism aims to inform, educate, and educate the masses on different topics swirling around them.

As the digital age has often confirmed the argument that the pen and the camera are more effective than the sword, countless openings have been provided all over the world for journalists.

There is a need for clear reporting of incidents, more specialization, and media integrity. Therefore, the need to be a journalist who specializes in several disciplines, such as politics, banking, economics, etc.

Educational qualification: In general, the minimum eligibility is set at 10+2 certificates for a bachelor’s degree in journalism, and a graduate degree in journalism is required for postgraduate courses. Some institutes and private academic players also offer journalism degrees of one year for which 10+2 are qualified.

Courses in specialist fields of journalism are also available, such as sports, film, art, press law, etc. The idea that no course or schooling will claim to make someone a trained journalist must be kept in mind.

The courses can only educate persons in technical aspects. For this career, in addition to the ability to compose and create news reports in a right, succinct, and desirable manner, one must have a nose for news.

Besides, one should have a curious mind, the force of will, and the capacity to present knowledge in a true, succinct, and efficient way. Therefore, he/she should be able to organize thoughts and explain them effectively in both written and oral modes of communication.

As a newspaper, magazine, news service, radio, or television reporter, it would be your duty to write with pace, clarity, and rigor. In this position, objectivity and the sense to find a story will be very crucial.

To be a reporter with a special cause, you need to have an extensive grasp of a specific area, such as politics and sports, etc. Based on your view, you must still have the capacity to read between the lines and describe the news.

The work of a feature writer is about writing clear stories and aspects of particular subjects.

They are only concerned with reporting their thoughts on news subjects by editorial columns.

The role of the Proof Reader is to analyze and match facts with the edited version. One must have skills in syntax, spelling, and punctuation for this work.

The editor is the central head whose primary duty is to ensure the print media’s uniformity and coherence. In an striking way, he/she launches the newspaper.

One writes about a certain chapter of the newspaper or magazine as a columnist. Your column will paint your view on every issue under the sun, such as fashion, politics, films, and the like.

You would have to be well-read and learned to be a critic. One must have a thorough grasp of the topic involved, regardless of the area.

To become a good photojournalist or, in plain terms, a visual photographer, one must take pictures that show a news story easily and work in tough cases. He/she should also have the capacity to compose good captions and grasp photography’s technical aspects.

To get respect as a cartoonist, you have to be creative and funny. A cartoonist reports on public figures and other activities with satire.

The roles of researchers whirl around the channel or the site’s study. You must be inventive and curious to be a researcher.

A broadcast reporter must have great listening and presenting ability combined with a news nose.

Strong listening skills, voice, grammar and language order, general knowledge, intellect, and writing ability in difficult places are important to this function. To convey the reporting’s proper sound, the host must also have command over vocabulary and facial expression.

As a global electronic society, the Internet, which links millions of people, is rapidly evolving as a prominent forum for shifting views. It has many USPs over other types of news in the media.

At no cost, it provides updated news material. The web reporter must keep the news sharp and interesting. The most critical task here is the editing and bringing in the news, as many web surfers prefer to search the pages and not read them fully.

Also, eye-catching captions and key facts are needed. Therefore, one must be capable of writing concisely to become a web journalist.

Get in touch with ForeignAdmits to get your profile evaluated! Also, to read more interesting and informative blogs click here.