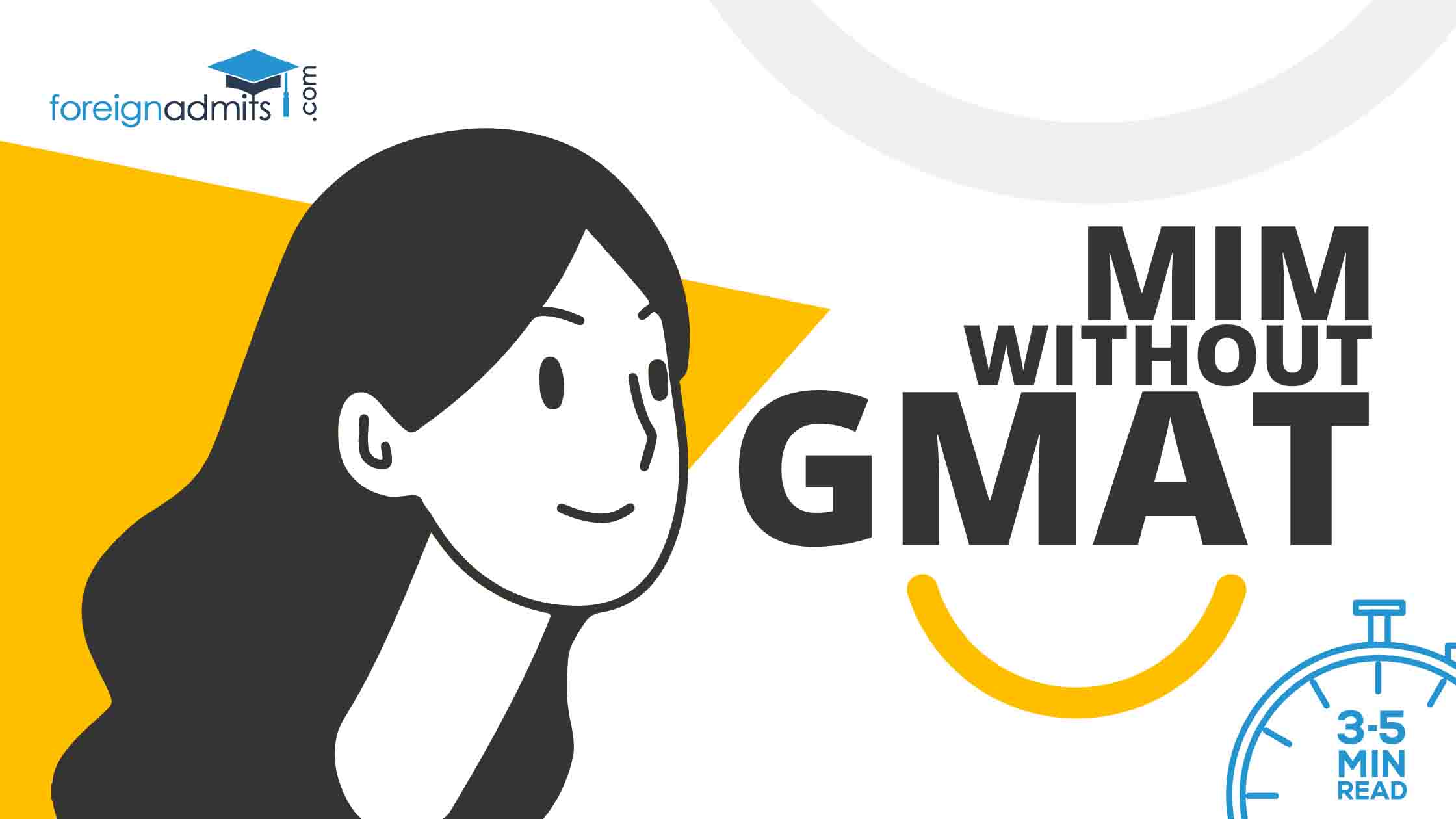 Most applicants worldwide choose to follow it because MIM or Master of Management is now a common management program. Yet, to follow a MIM degree, there is a difficult competition to get into a top business school abroad. The GMAT score is also a necessary admission prerequisite in different top colleges. Further, to secure a seat in their preferred business school, applicants make a lot of effort to secure a strong GMAT score. In this blog, we will address the top MIM Without GMAT colleges.

MIM at The University of Sydney (Usyd)

The University of Sydney, founded in 1850, is an open academic university. It is considered to be among the best universities in the world. It also received, in 1858, a Royal Charter from Queen Victoria. Moreover, the degrees granted are equal to those offered in the United Kingdom after obtaining the Royal Charter.

Camperdown College, which is situated in Australia, is the primary university campus. The campus houses Faculties of Education, Social Work, Medicine, etc. It also has Humanities, Economics, Architecture, and Veterinary Science. Further, the university has an impressive network of alumni.

MIM at The University of Melbourne (Unimelb)

There are 11 academic institutions within the grounds. These include the Florey Centre for Psychiatry and Mental Health, the Walter and Eliza Medical Research Institute, and the Grattan Institute. Before selecting a single topic in their area of interest, university students can read on all topics.

The University of Melbourne has an Accelerator Program to improve the students’ abilities. The program further comprises public activities, seminars, feeder services, and on-stage association with entrepreneurs. This service deals with vital medical equipment and hardware challenges, online solutions, apps, and technologies. The accelerator program has been listed in a global ranking of the top 25 incubators developed by the University Business Incubator Index.

Monash University’s first and main campus was in the city of Clayton, Melbourne. Engineering, Law, Humanities, Business and Economics, Pharmacy, Nursing and Health Sciences, Education, Technology and IT are on the campus. The university’s other campus is Caulfield Campus, the 2nd largest campus after Clayton. Peninsula College, home to Physiotherapy, Occupation Counseling, and Psychology, Health Care, and Nursing, is one more university campus. The University also has three more Parkville Campus Law chambers.

Australian National University, which was established in 1946, is an open research university. After merging with Canberra College, it launched the undergraduate degree program in 1960. The college has four centres. These are the School of Physical Sciences, Social Science, Pacific Science, and Medical Study. ANU is renowned for the co-curricular and cultural programs maintained by the University Council.

Founded in 2000, the University of Singapore Management (SMU) is a private university. Via the Wharton-SMU partnership, the Wharton Research Center partnered with the university in 1999. Thus, SMU established four schools, three centres, and a library. It follows the American curriculum.

MIM at The University of Illinois at Urbana-Champaign (UIUC)

The University of Illinois at Urbana-Champaign is a university of academic research located in Urbana and Champaign’s twin cities in Illinois, USA. Established in 1867, this school is part of the Association of American Universities. It lists under the Carnegie System of Higher Education Institutions as an R1 Doctoral Research University, standing for the highest study act.

The university has made many additions since its start. These include the development of the first light-emitting diode, the invention of the third branch of the ‘Tree of Life’, the creation of the first World Wide Web browser, and input to magnetic resonance imaging design.

Speaking of alumni, 29 alumni and faculty members at the university have earned a Pulitzer Prize. There are 11 Nobel laureates among the alumni, faculty, and scholars, and another 18 have received Pulitzer Prizes. The only one to have won two Nobel prizes in physics is Joe Bardeen, who was part of its faculty.

Get in touch with ForeignAdmits to get your profile evaluated! Also, to read more interesting and informative blogs click here.