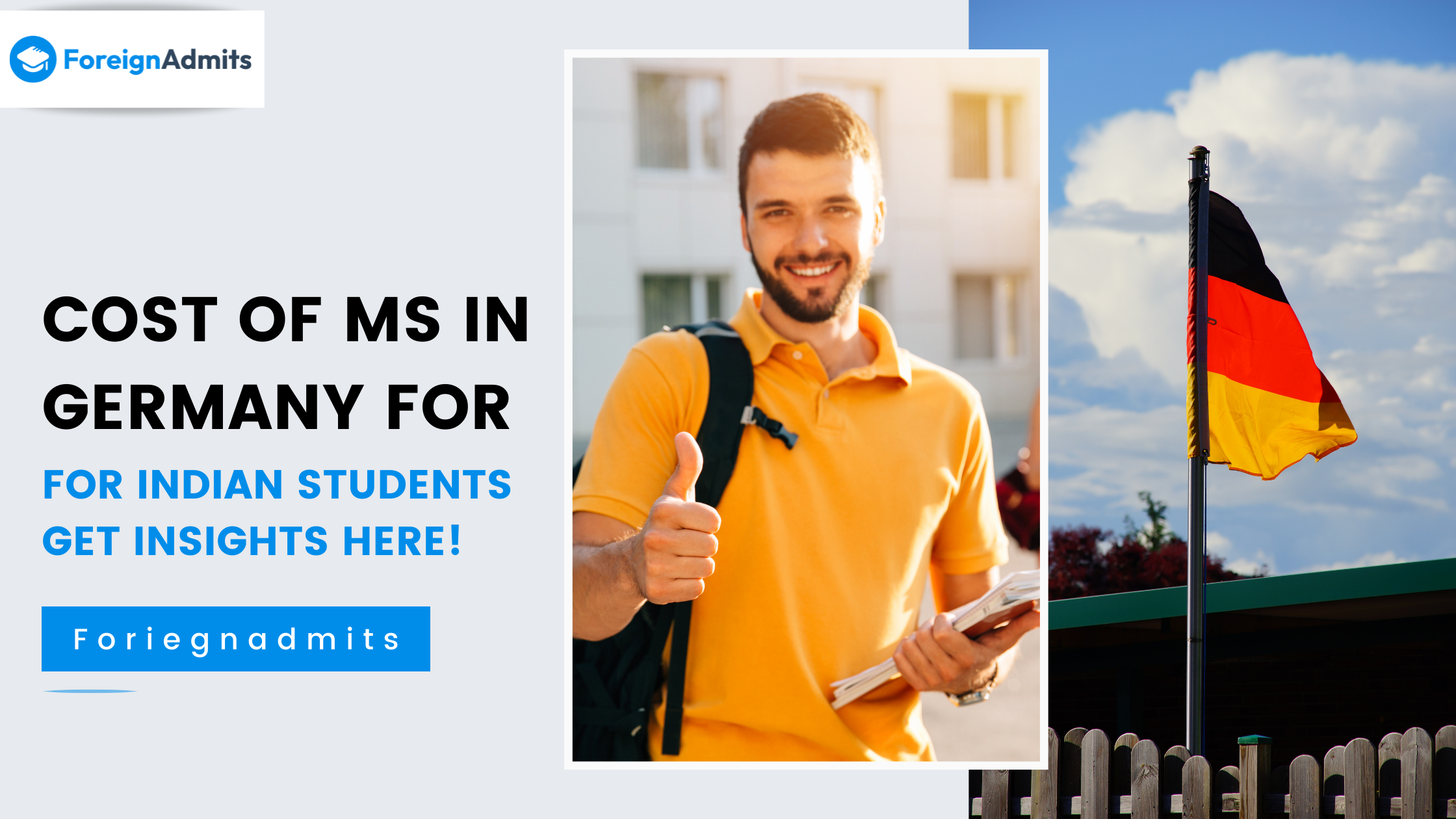 Germany is considered to have the most robust economy in Europe, with a GDP worth 2.8 crores INR in 2019, according to the World Bank’s official data and projections from Trading Economics. This value represents 3.17% of the world economy. Hence, it inarguably has the highest potential for study abroad applicants who want to study, gain more experience through internship and research opportunities. This results in a significant influx of students who wish to pursue MS in Germany. Read further for knowing more about the Cost of MS in Germany for Indian Students.

In addition to the above-stated reason, numerous benefits include globally ranked universities, valued across the world for their top-class quality education and low MS in Germany cost in Indian rupees.

MS in Germany cost in Indian rupees is approximately 2,76,700 to 9,34,800 INR per annum. It is one of the primary factors determining a prospective student’s fate in applying for one of Europe’s educational hotspots.

This includes the tuition fees, cost of living, and other miscellaneous expenses. Additional charges, like the cost of preliminary tests, visa processing, etc., which the students accrue during the preparation stage before arriving in Germany, need to be considered.

Before a student decides to pursue MS in a university in Germany, you will have to appear for different competitive exams to apply to those colleges.

Germany requires proof of English proficiency if a particular course is taught in English.

The cost that incurs to the student living in India is the cost of registration of these exams. Below we have tabulated a list of exams accepted in Germany and their cost in the Indian rupee.

Application Cost of MS in Germany for Indian Students

The cost of applying for an MS course in German universities is not uniform as it varies markedly depending on the university, the method of study, and the program’s level.

For schools that charge application fees, this fee’s payment is usually online via the different amounts incorporated by the institutions.

For a study duration greater than three months, applicants are expected to obtain a Germany visa for studies. MS being a post-graduate course, this study permit is mandatory.

The three types of Germany student visas are:

Applicants are expected to pay the visa application fee of 5,280 INR – 6,600 INR after the submission of the necessary documents is required, which includes:

Immediately after arrival in Germany, the student is expected to secure permanent accommodation. Students are then required to proceed to the Resident’s Office for registration, followed by studies enrolment, and finally, the application for a residence permit for studies.

Most schools do not charge some fees, while others charge ridiculously lower amounts than their counterparts in other European countries.

The table below shows the approximate tuition fees and living cost of MS in Germany for Indian students:

Cost of living in Germany for Indian students

The highest estimated monthly expenditure of international students in Germany is rent. Admitted students can live on-campus or off-campus depending on his/her budget, preference, and the school’s policies on accommodation.

Below are some other expenses that the student will incur while living in Germany.

Students wanting to pursue MS or any other course from German universities should plan wisely. Financial planning is the most integral part of it. It should be done keeping in mind all expenses.

Financial loans are also provided by banks in Germany and even in India for higher education.

Be it Bachelors or Masters, Germany has it all. We hope we could give a clear idea of how much will it cost you to pursue an MS degree from Germany.

Q1. Is it possible for Indian students to study in Germany?

Ans. Germany has the most reasonable tuition rates compared to other nations. Hence, an increasing number of Indian candidates are opting for further education at the best pricing.

Q2. Is MS free for Indian students in Germany?

Ans. In 2014, about 16 German state institutions removed tuition fees for all under-graduation courses and some chosen master’s programs for local and foreign students.

Q3. Is the GRE required for MS in Germany?

Ans. The GRE is not required for admission to the majority of German institutions. However, some colleges require overseas candidates to have a specific GRE score. TU Munich and RWTH Aachen are two such colleges that need GRE scores from international students seeking an MS in computer science.

Q4. Is a German diploma recognised in India?

Ans. For starters, the AIU (Association of Indian Universities) recognises international degrees, which means they are regarded and legitimate in India.

Q5. Can I find a decent job in Germany after finishing my MS degree?

Ans. Yes, foreign students can acquire employment in Germany after finishing their master’s degrees if they meet all of the prerequisites and present all of the necessary documentation.