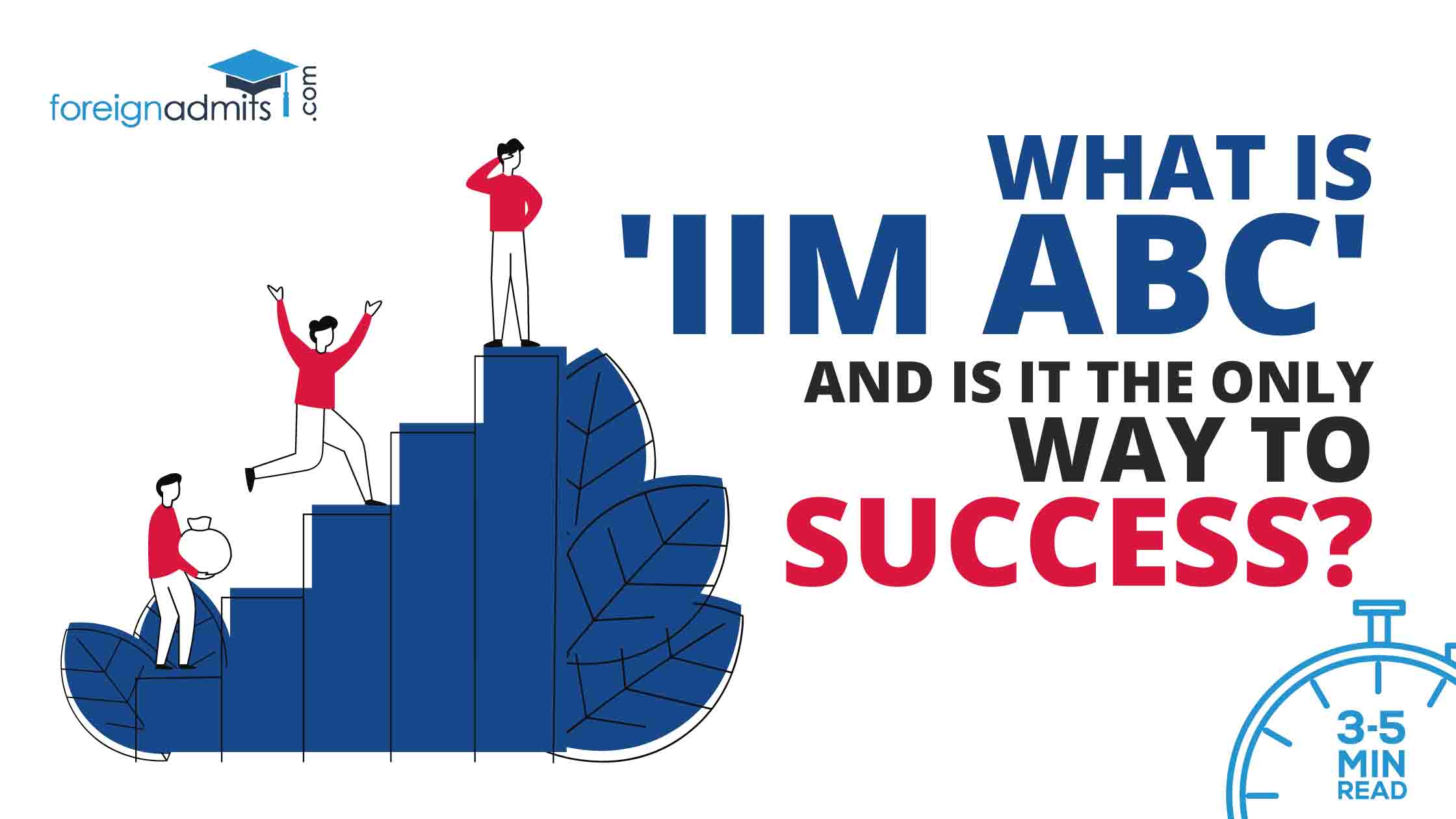 Without a doubt, ‘IIM ABC’, which refers to, IIM Ahmedabad, IIM Bangalore and IIM Calcutta which are considered to be India’s top 3 Management Education institutes. But which of these among the others is the stronger one? When one has to pick from 2 or 3 of these B-Schools, what does one do? The final results are already out for these 3 IIMs – Ahmedabad, Bangalore, and Calcutta. However, while some students are damn sure about which B-School they want to attend, others have begun to ask about which of the three B-Schools to select. In comparison to the three biggies as critically as possible in this blog, and ideally this can allow you to pick the right B-School match for a student.

The comparison of IIM ABC : Ahmedabad vs Bangalore vs Calcutta

Created in 1961, IIM A (Ahmedabad) has a 100-acre campus of baked-brick buildings designed by the famous architect Louis Kahn. In addition, 25 dorms are situated on the campus, each housing 25-44 students in single-person quarters.

Created in 1973, IIM B (Bangalore) also has a 100-acre campus with all-stone designs, lush-verdant forest and landscaped gardens. Moreover, the campus has 10 blocks of hostels for each student with a single-person bed.

Created in 1961 (some time before IIM A), IIM C (Calcutta) has a very beautiful campus spread over 135 acres with 7 lakes, a mini Howrah bridge replica, a spaceship-like MCHV building and a modern big auditorium. Moreover, there are 4 large hostels with single rooms on the campus; one of these hostels is co-edited (with girls in a separate wing). Students of families are accommodated in a fifth hostel, called the “Family Hostel.”

The payments for the three institutes are exactly the same-it used to be a few lakhs lighter on your wallet until a few years ago IIM C, not the case anymore.

Quality of Education of IIM ABC

The credibility of the 3 institutes, that is IIM ABC, is primarily because of the quality of education imparted therein. While pedagogy, style of teaching and academic rigour can vary from institute to institute, it can be assured that the final result will be more or less identical. Moreover, in terms of funded research and outsourcing projects, IIM A is well ahead, while Bangalore has the lead when it comes to publications and citations.

It is interesting to remember that the recruiter’s list to a large degree for the Big 3 match each other-there are just a few businesses that employ from one of them solely. IIM A has a number of placements in Consultancy along with Sales & Marketing while Consulting is the forte of IIM B and Finance for IIM C. In addition, IIM C also has exclusive placements in the Company Analytics Domain. However, regardless of the position you want to work in, you can enter any of these B-Schools and expect a successful placement.

IIM Entry Requirements 2021-2023: Clearing CAT 2020, which was performed online on 29 November, is the first step towards getting admission to IIMs across the country. On January 02, 2021, the outcome of CAT 2020 was announced. Registration started on August 05 for CAT 2020. The IIM entry process, which entails shortlisting applicants on the basis of the Written Skill Test (WAT), Group Conversation Rounds (GD) and personal interview rounds, will soon begin ( PI). The selection rounds should be performed in an online mode, taking into account the COVID-19 crisis across the country.

At present, there are 20 IIMs, and since passing the IIM Act 2017, most IIMs have begun to grant MBA degrees instead of Post Graduate Diploma in Management (PGDM). In August 2020, the top IIMs, such as IIM ABC, IIM Kozhikode, IIM Lucknow and others, announced their 2021 entry requirements. The CAT percentile is the most vital component of admission. To be shortlisted for appearance in different selection rounds, an applicant must clear the CAT cutoff needed by the relevant institute. Let us dive deeper into the article on admission policy for the year 2021-2023 to appreciate the comprehensive IIM admission requirements for 2021-23.

Q. How many seats are there in IIM ABC?

In the information below, find out the IIM fee structure and seats for the academic year 2021:

Q. Which is better IIM A or IIM B?

IIM-A vs. B is an endless fight—and a really good one! … Academics were given a lot of attention by IIM-A, whereas IIM-B had a well-rounded orientation. Those in IIM-B had some leeway in the first year, when IIM-A students had obligatory attendance and a high course load.

Q. What is salary for IIM students?

IIM placements are typically performed for the PGP batch every year from December-February. The average salary package given to top IIM applicants ranges from Rs 20-25 lakh per year, while salary packages for younger IIMs vary from Rs 10-20 lakh per year.

Q. Is IIM better than Harvard?

Compared to Harvard or Stanford, a report by The Economist magazine reports, studying at IIM-A (IIM-A) gives you more return on your money. In terms of churning out ‘Strong Value MBAs’, the top Indian business school was ranked fourth among the 20 business schools.

Q. What is the average package of IIM ABC?

Q. Why is IIM B better than Ahmedabad?

It’s not. Among IIM ABC for that matter, it would be too naive to suggest that one is better than the other. The placement situation in IIM A and IIM B is very similar, given that placements are the key consideration in evaluating an Indian B-school for most aspirants. However, there are sharp variations between the society and course layout in these two Meccas of Indian educations. Based on my decision to select IIM B over IIM A, I would point out the distinctions.

The most academically rigorous B-School in the nation is IIM A. There should be no complaints about this; as scholars is the key explanation why, in the first place, we go to a B-School. If you’re going to be in a place that has an open information library like no other, it’s only fair to spend more of your time soaking in as much of this as you can. However, as economists love to put it, for almost everything to succeed, there must be an equilibrium. Here is where a distinction is made by the balance. The balance between academic and non-academic practices.

Now, at this point, many people will argue that anyone is hugely misguided to say that the academics at B are less comprehensive than A. Therefore, in spite of the vastness of the syllabus, the scholars at B are almost as comprehensive as at A. There is a significant difference in the commitment needed, though. Compared to the hybrid of Case, Lectures, Seminars at IIM B, the whole program is taught using a cased-based pedagogy at IIM A. Which means that he needs to devote at least 3-4 hours every day pre-reading certain cases before class for a student at IIM A to remain on top of academics.

There is barely any time left to catch up with sleep, let alone extra-curriculars, when paired with group tasks and assignments. This is not to deny that IIM A does not have a social life that is vivid. But on a regular basis, you end up losing a lot of stuff that exist comparatively less at IIM B. Rest assured, you have some spare 3-4 hours (at least 2 out of them) to fulfill your passion at IIM B every day! And that is what harmony is in work life. No matter how much you enjoy your job or if it even seems to work for you, in order to grow and/or retain a well-rounded and more full personality, it is important to follow goals beyond its purview.

This was a huge factor. Provided that this student exchange program runs for a whole trimester (3 months) and has an enviable array of B-Schools participants, it is imperative that all hands grab a chance like this. In terms of the Ivy League B-Schools and some of Australia, Europe and Canada’s top universities, as stated here, IIM B has far more choices than IIM A.

Compared to the Lectures, Cases, Seminars combination at IIM B, IIM A has a full case-study-based course structure. This suggests that topics such as accounts may still be taught based solely on case studies. The case-based pedagogy is now a huge explanation why many people choose IIM A. Nevertheless, I agree that there are subjects in which the pedagogy of the case study is ideal (marketing, technique, etc.) and there are subjects in which the instructor, who is a master of the subject, teaches you the fundamentals of theories before encouraging you to apply them would deeply boost the learning (accounting, finance, etc.).

IIM B is the country’s first B-School that offers 3 electives in the first year. The value of this is that in the area in which you are doing your internship, you will have completed 3 classes, which would be a huge advantage. In comparison, IIM B’s 2nd year is fully elective-based, while IIM A also has a few required courses in the 2nd year.

This is where the obvious champion will be IIM A. In people’s eyes, the brand image of IIM A is much greater than that of any other B-School. Moreover, IIM A’s alumni network is more organised and more involved. However, as per your specifications, the meaning of this argument should be adjusted.