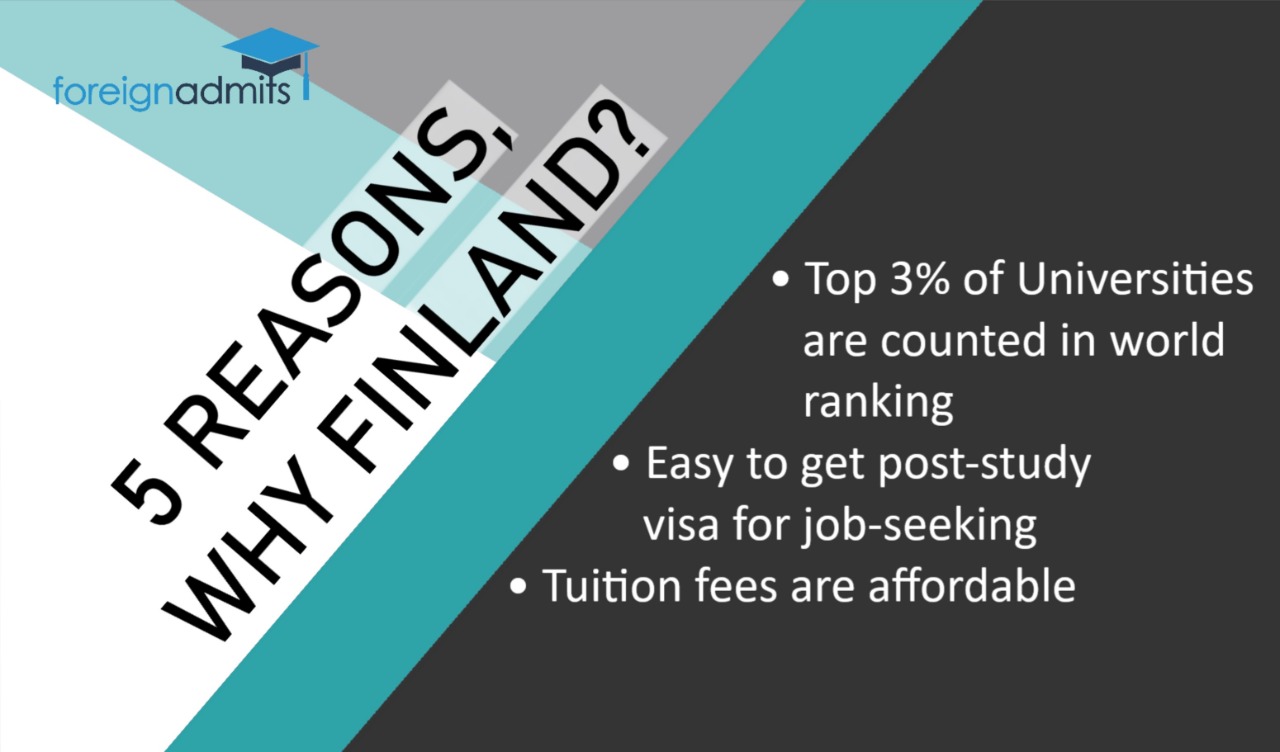 Have you heard of the proverb “A Good Mind is a Healthy Mind”?When I talk about Finland and Finns this famous proverb instantly strikes me. The possible reason being, the happiest and safest venue to live in. Plus, if the people residing there have a soulful mind, the success of that country is at the apex. So, can this be the most appropriate reason to settle and study there?

Partially, Yes because there is another welcoming country, Canada that supports students in their work permit, but there are other determining reasons to study in Finland too. It is a beautiful country with a distinct and historic culture, magnificent architecture, and a fascinating way of life. The Reason to study in Finland is its education, government transparency, stability, and saunas.   Is it all that makes the Finland top the list? No. Thus, in this blog, I’ve decided to gather up the top 5 reasons to study here.

Finland is located in northern Europe with no crowd and pollution. It is a place of everyone’s imagination, an atmosphere of innovation, and sophistication. They have been rated as one of the safest, happiest, eco-friendly, and the most stable countries in the world. It’s not an exaggeration to say that studying in Finland will be a life-changing moment for you.

The first thing you will hear about Finland is the Education system. It has consistently stayed at the top of worldwide education rankings. They have achieved this position not just from academics but also from the mentality and principles on which Finnish Universities were built. Their teaching methods are unique in their own way. The important core values of these universities upheld equality, responsibility, cooperation, and adaptability. Teachers at universities in Finland sincerely believe students should comprehend critical, practical things that they can actually make use of these in their lives.

Finland sets the perfect example of how a relatively small country population can emerge as the second happiest nation on earth. Thus, students coming to study abroad need not worry about the unfamiliar environment in which they are about to enter. In fact, they are honest and respect each other’s property, reducing the worry from being theft. To prove this, a test was organized by the Reader Digest in Helsinki and found that 11 out of 12 (intentionally) “lost” wallets were returned.

Secondly, the costs of living are much cheaper than in the rest of Europe. You may also know the cost of living for International Students in Germany.

Other than the education system, Finland is widely known as Land of Thousand Lakes. Because of its geographical location and the breathtaking landscapes with pristine lakes and verdant forests, their culture and the most beautiful natural phenomena, the Northern Lights, traveling in Finland is beyond imagination.

Even they have the lowest crime rate, named as the safest country in the world since 2017 by World Economic Forum. The only greatest risk to public safety comes from the wildlife – so watch out on the highways!

The mother language of Finns is Finnish and Swedish. However, most people in Finland can speak English very well. You won’t believe, Finland has been ranked as 4th country where English is spoken widely. This makes you wonder, is there something that Finns are not good in?!?

International students won’t have any problem communicating with the locals and in the university as well. You may also face other common challenges while studying in a foreign place. There are more than 450 programs in English, from short summer courses to full degree courses. You may also apply to the Summer Universities that offer Finnish language and a cultural course on many different levels.

Hither is some of the Finnish universities offering them:

Finland regards education as a primary right and believes everybody should get equal opportunities. Like so, they offer scholarships to not only Finns but also to International students. They do not require paying tuition fees, and if they have to, it is inexpensive as compared to other Europe. The scholarships are usually based on academic performances and have different types. For example, full or partial fee waivers, performance-based refunds, living cost allowance, etc. You may check information about scholarships directly from your preferred university web-page.

1. Top 3% of universities are counted in world rankings

2. Easy to get a post-study visa for job-seeking

5. English is not prior requirement for student or residence

7. To experience a new culture