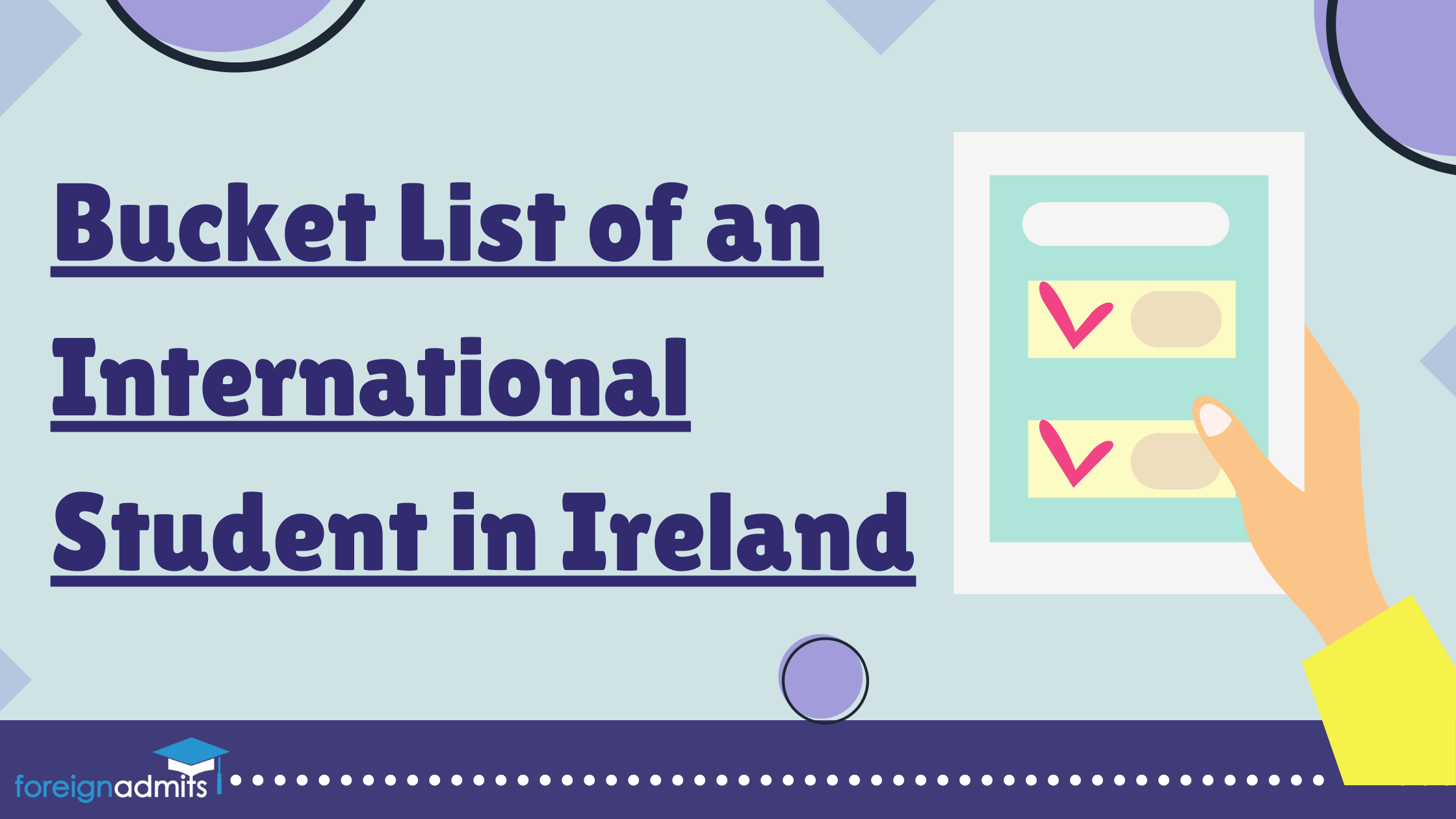 What distinguishes Ireland from the rest of the world for an international student? For starters, there are James Joyce’s and W.B. Yeats’ literary legacies, traditional sports like hurling and Gaelic football, smooth beverages like Guinness and Irish whiskey, hearty meals like soda bread and Irish stew, and a plethora of pop idols ranging from U2 and Boyzone to Jedward.

Aside from the cities’ culture and craic, Ireland has vast swaths of breathtaking natural landscape, ranging from the jagged cliffs of Moher to the pony-trekking beaches of Connemara.

Ireland’s universities aren’t bad either, as evidenced by their rankings in the QS World University Rankings® 2019. Five of the eight Irish universities listed in the worldwide rankings are within the top 450 globally. Trinity College Dublin stands in joint 104th place.

Are you interested in studying in Ireland? Do you want to fall in love with the Emerald Isle? Now is the time to start organizing your trip.

MBA in Ireland: A Complete Perspective

Visit the Sites in Dublin

Dublin, Ireland’s vibrant and metropolitan capital, is both historic and attractive and buzzing with fascinating nightlife and events. It is extensively included on any list of things to do in Ireland; from the Guinness Storehouse to Dublin Zoo, the city’s castle to the Dublin Writers Museum. Others include Ireland’s National Gallery, Botanical Gardens National Leprechaun Museum.

Dublin is a beautiful destination to study in Ireland. It has one of the fastest increasing populations of any European capital city. Indeed, Ireland has a large, fun-loving international student community, and various cultural institutions. Dublin is known for its live music scene, earthy pub culture, annual festivals, etc. It boasts of a rich literary past, in addition to theatre.

In this year’s QS Best Student Cities index, see how Dublin compares to the rest of the world’s cities.

Explore Trinity College and Discover the Book of Kells

Trinity College Dublin is the best-performing university in Ireland. It ranks joint 104th in the current QS World University Rankings. It also takes pride in prominent alumni such as Oscar Wilde and Samuel Beckett.

Trinity College is ranked among the best for 34 out of 48 subjects in the QS World University Rankings by Subject 2019. It has spots in the top 50 for classics, English language, literature, performing arts, pharmacy, and nursing.

However, Trinity College is well-known among more than just academics. It’s also the site of one of Ireland’s most popular tourist attractions. The Book of Kells is a beautifully preserved ancient Celtic artifact. It is recognized mainly as Ireland’s finest national treasure, is housed in Trinity College Dublin’s Old Library. The Book of Kells is a magnificently drawn book. It contains the four Gospels of the New Testament. Moreover, it is thought to have been written around 800 AD by Columban monks in an Irish or British monastery.

Look no further if you want to see one of the prominent universities in Ireland as an international student while also getting up close and personal with a canonical theology text.

Hit the Surf in Donegal Bay Off the West Coast

Even if Ireland’s temperature isn’t the warmest for an international student in Ireland, don’t let that stop you from surfing the west coast’s waves. There’s some excellent surfing up that way. Several surfing champions have credited the area with being one of the best in the world.

The funnel form of the coastal bay boosts the magnitude of the swell. Thus, the size of the surf, Donegal Bay has garnered a lot of popularity among surfers.

The Donegal shore is well worth a visit, even if you aren’t a surfer. It has some of the most beautiful and sandy beaches you’ll find anywhere, with rolling dunes, isolated coves, and small bays – even if it can’t reasonably claim the Caribbean’s balmy weather. County Donegal is a popular tourist destination, with lush scenery, nature reserves, golf courses, and friendly residents, so make sure to take a break from your studies and get some west coast sea air.

Get Off the Mainland and Experience the Aran Islands

Surfing isn’t the only incentive to dive into the icy seas off Ireland’s west coast; it’s also the only means to get from the mainland to the Aran Islands, a trio of islands at the mouth of Galway Bay. With their rich cultural and linguistic past and many local islanders bilingual in English and Gaelic, the islands make a must-see for anybody interested in learning more about Irish culture and the Gaelic language.

While you might get away with a “top o’ the mornin to ya” greeting in Dublin as an international student in Ireland, the Aran Islands provide an opportunity to practice the difficult Gaelic language. By the end of your stay, you should be able to say “maidin mhaith” or “dia dhuit ar maidin” (both meaning “good morning”) to the people.

And what are your plans for the rest of your stay? Consider renting a bike to visit the numerous outdoor museums, cliff-climbing places, medieval castles, lighthouses, surfing areas, beaches, and craft-producing communities; you’ll soon forget about those impending assignment deadlines.

It’s easy to forget the original cause for this Irish holiday, although it’s celebrated practically everywhere in the world. For many, St. Patrick’s Day is just a fun excuse to dress up in green, speak with a poor Irish accent, and drink too much Guinness. St Patrick’s Day is a public holiday in Ireland. It commemorates the life of Saint Patrick, the foremost champion of Irish Christianity. People observe it every year on March 17th.

St Patrick’s Day has grown into a week-long festivity in his honor. The event brings the community together. It allows the country to show off its culture, sense of humor, and tourist attractions. Whether or not you can manage a week of Irish revelry (they certainly know how to party), make an effort to participate in some of the activities, learn an Irish jig, and spend St. Patrick’s Day the way it should be spent.

What if we told you that St. Patrick was initially identified with the color blue, but this has since changed to green.

Head South and Explore the Historical Sights of Cork

Tripe, a delicacy prepared from various animal stomachs, is one of Cork’s traditional delicacies. Still, we’re confident that if you visit Ireland’s second-largest city, you’ll be able to get a sense of the town without having to eat any – unless you want to.

An international student in Ireland who doesn’t have the stomach for tripe will be relieved to learn that there are many other things to do here. Admire the city’s Georgian architecture or pay a visit to the medieval Red Abbey. You can also go window shopping on St Patrick’s Street, the city’s main thoroughfare.

If that isn’t enough, visit the Cork Opera House or the famous English Market for some more delectable local fare. Aspiring artists and performers will be interested to learn that Cork is home to several prestigious art and design institutes. It has an arts calendar jam-packed with events such as the Cork Film Festival, Cork Jazz Festival, and Live at the Marquee.

Belfast is not part of Ireland; it is the capital of Northern Ireland, a neighboring country. It is, however, only a short distance away and well worth a visit while studying in Ireland. Belfast is well-known for its political unrest. It was a hotbed of sectarian warfare between Catholics and Protestants throughout much of the twentieth century. This history is vividly reflected in murals throughout west Belfast.

These murals, known as “The Writing on the Walls,” reflect political, freedom, and loyalty problems. Some also pay homage to sports icons, Northern Irish achievements (such as the RMS Titanic), and football.

Marvel at the Giant’s Causeway

Why not pay a visit to the Giant’s Causeway while you’re in Northern Ireland? This natural wonder, a UNESCO World Heritage Site and a National Nature Reserve, comprises roughly 40,000 interconnecting basalt columns formed by an ancient volcanic eruption. Visitors can walk on, over, and around the many hexagonal columns while watching the waves crash against the rocks and marveling at the cliffs’ sheer magnitude. The Giant’s Causeway has remained one of Northern Ireland’s most popular tourist attractions due to the ability to explore every rock face area.

The Honeycomb, The Wishing Chair, The Giant’s Granny, Lord Antrim’s Parlour, The King and his Nobles, The Keystone, The Chimney Pots, The Fan, and The Punchbowl are some of the other historic natural wonders to visit as part of the Giant’s Causeway.

Enjoy a Summer of Festivals in Galway

Galway bills itself as Ireland’s festival capital, and with a calendar of events ranging from oysters and jazz music to horse racing and literature, the claim is well-founded.

It’s no surprise, then, that Galway, together with the Croatian city of Rijeka, has been chosen as the European Capital of Culture for 2020.

Regardless of where you study in Ireland, you should make a summer trip to Galway to take advantage of these fantastic festivals.

Why Should You Pursue Higher Education in Ireland?

The Newgrange Megalithic Passage Tomb is older than both the Great Pyramid of Giza and Stonehenge. It is one of the world’s most famous prehistoric structures.

Newgrange is well renowned for the shaft of sunshine that reaches the chamber floor on the shortest day of the year. It is made up of a succession of passage tombs. This winter solstice sight is picked by lottery. However, if you visit the tombs, your guided tour will feature a re-enactment of the sun rising in the chamber at sunrise. This sight was first observed 5,000 years ago.

The mausoleum is about 45 minutes north of Dublin, making it a convenient day excursion for those studying there.

Other Top Things to Do in Ireland