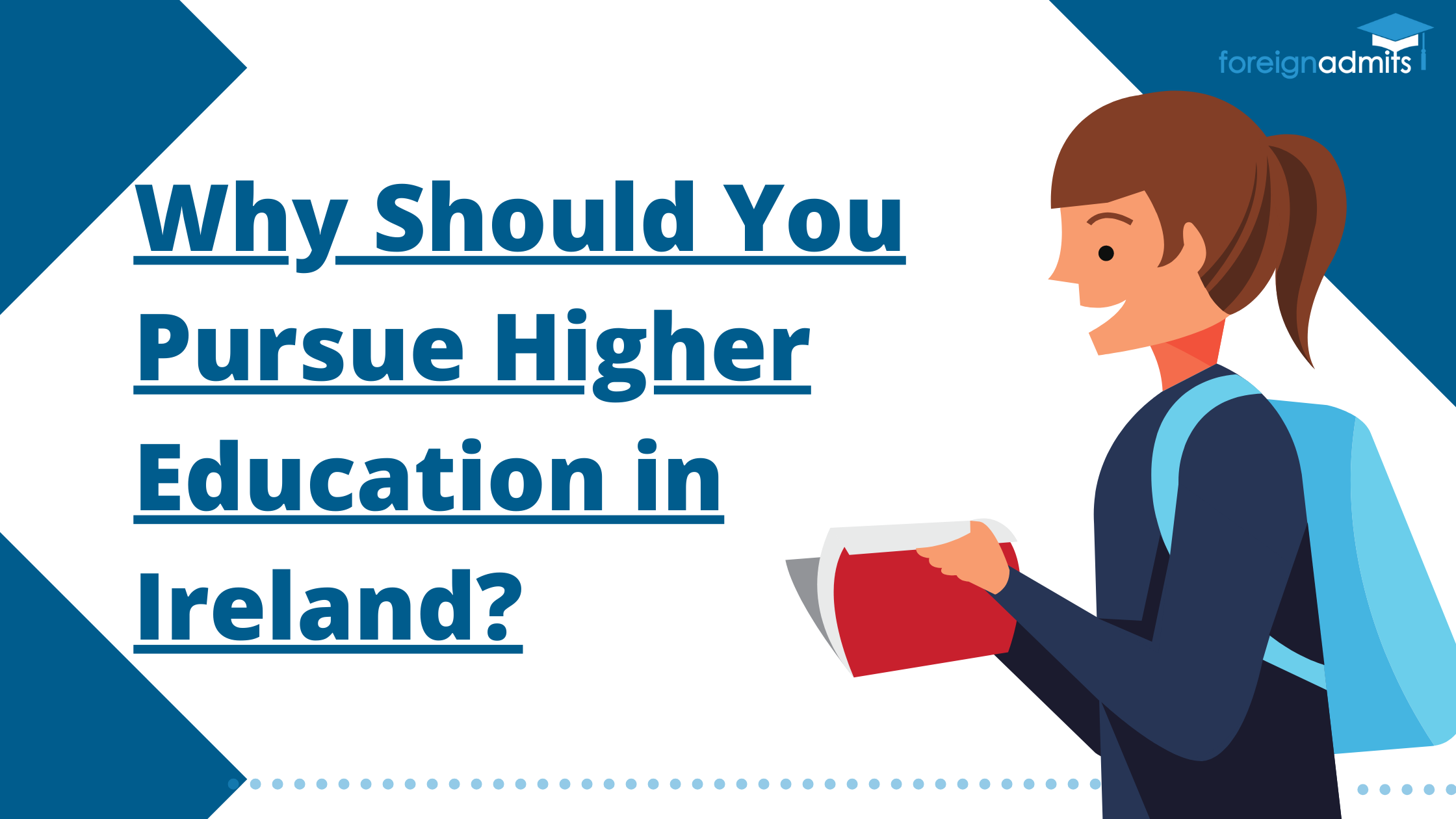 Higher education in Ireland is one of the greatest in the world, and there are numerous reasons to study here. Moreover, schools and universities are worldwide networked, and graduates of Irish educational institutions can pursue various vocations around the world.

Ireland is a small island nation off the coast of Europe. Besides, after Great Britain, it is the continent’s second-largest island. It’s also known for its lovely green scenery, intriguing history, and welcoming people.

Why is Ireland a Great Destination for Higher Education?

Higher education in Ireland has one of the highest standards in the world, with seven top-tier universities and a focus on research and global collaboration.

The Irish are proud of their homeland and culture, which they are eager to share with you. Although Ireland is a small country (population: roughly five million), more than 70 million people claim to be of Irish descent worldwide. As a result, after living in Ireland, you will have friends from all over the world.

Ireland is a safe and tolerant country that consistently ranks among the top 20 countries globally for quality of life, peace, and human development. With a third of the population under the age of 25, it’s also a young country. Thus, if you choose to study in Ireland, you will join a community of over 35,000 international students from 161 countries passionate about their home country.

Studying in Ireland for a career can help you get off to a terrific start. Besides, Ireland has a high ranking for educational quality, including education that matches the needs of a competitive economy and knowledge transfer between universities and foreign firms. It’s also rather enjoyable.

Although the major cities in this region are smaller and easier to navigate than other large cities worldwide, they are dynamic and culturally advanced.

Do you want to attend one of Ireland’s top universities? The top five universities in the Republic of Ireland are listed in the Times Higher Education World University Rankings 2019.

If you’re looking for an Irish equivalent of the University of Cambridge or the University of Oxford, you’ve come to the right place. In the heart of Dublin, study a research-driven curriculum taught by world-class experts.

UCD is one of the top 1% of higher education institutions in Ireland worldwide. Moreover, inside UCD’s award-winning student facilities, learn from internationally linked professionals. UCD is a great place to learn.

Royal College of Surgeons in Ireland

RCSI is Ireland’s only specialty higher education institution for health sciences, and it is home to Ireland’s largest medical school and internationally recognized health practitioners.

You’ll involve in innovative multidisciplinary research, as well as work-based clinical and overseas placements when you study at Ireland’s first five-star university.

NUI Galway’s renowned reputation and innovative programs span the creative arts to medical science, earning it the title of “the most charming city” by the New York Times.

Why Study in Ireland?

Ireland is home to several of the world’s most prestigious corporations, and job possibilities abound. It’s beneficial for jobs in software development and IT, engineering, financial services, food and agriculture, medical technology, and pharmaceuticals.

The Irish economy is one of the most dynamic in the Eurozone and the world’s sixth most competitive. It is a globally connected entrepreneurial country.

English is the most widely spoken language in the world and the global language of commerce and technology. Knowing how to read and write in English improves your marketability and provides you a significant edge if you want to work for a multinational corporation or in an English-speaking location.

Ireland is known for its contributions to art, literature, film, and music and is home to numerous museums, churches, parks, and monuments.

Ireland is conveniently located near major European cities and is only a short flight away, allowing you to visit the rest of Europe while you’re here.

The study methods used in Ireland are comparable to those used in the United Kingdom. You may discover that you have more autonomy in your work than you are accustomed to. This may appear appealing at first, but high expectations are expected, and you will quickly learn that you must work hard to keep up with your peers.

What you should know before beginning your studies in Ireland:

Because of its lush greenery and undulating hills, Ireland is known as the Emerald Isle.

Muckanaghederdauhaulia in County Galway has the longest place name in Ireland.

When given a question, Irish people do not respond with yes or no. Instead, they employ verbs. If someone asks, “Will you come in?” the response is “I will.”

The Irish love to talk about having a good time. Although there is no specific English translation, it loosely translates to “joy” or “entertainment.” For instance, “What’s the craic?” means “What’s going on?” or “How are you?”

Many people in Ireland speak an English dialect, yet many Irish families who have been here for generations understand and speak the language.

Irish people like getting together at home or in the pub to sing, dance, and play music.

Tea is a popular beverage among Irish people. They are the world’s biggest tea consumers, with an average of 1,184 cups consumed per person every year.

Guinness is an Irish beer that is extremely popular. Many Irish people would tell you that drinking Guinness is beneficial to their health and longevity.

Ireland treats women and men equally. Two female presidents have served, and in 2015, the Irish people notably voted in favor of homosexual marriage in a referendum.

Many Irish people believe in the existence of leprechauns and fairies, little supernatural creatures. Fairies are particularly popular since they are believed to possess magical abilities and provide happiness and good fortune to families.

Ireland is the only country in the world whose national symbol is a musical instrument. On Irish euro coins, passports, and government documents, the harp appears.

Ireland is famous for its medieval castles, which were built to defend against invaders in previous ages. Many of them are still open to the public today.