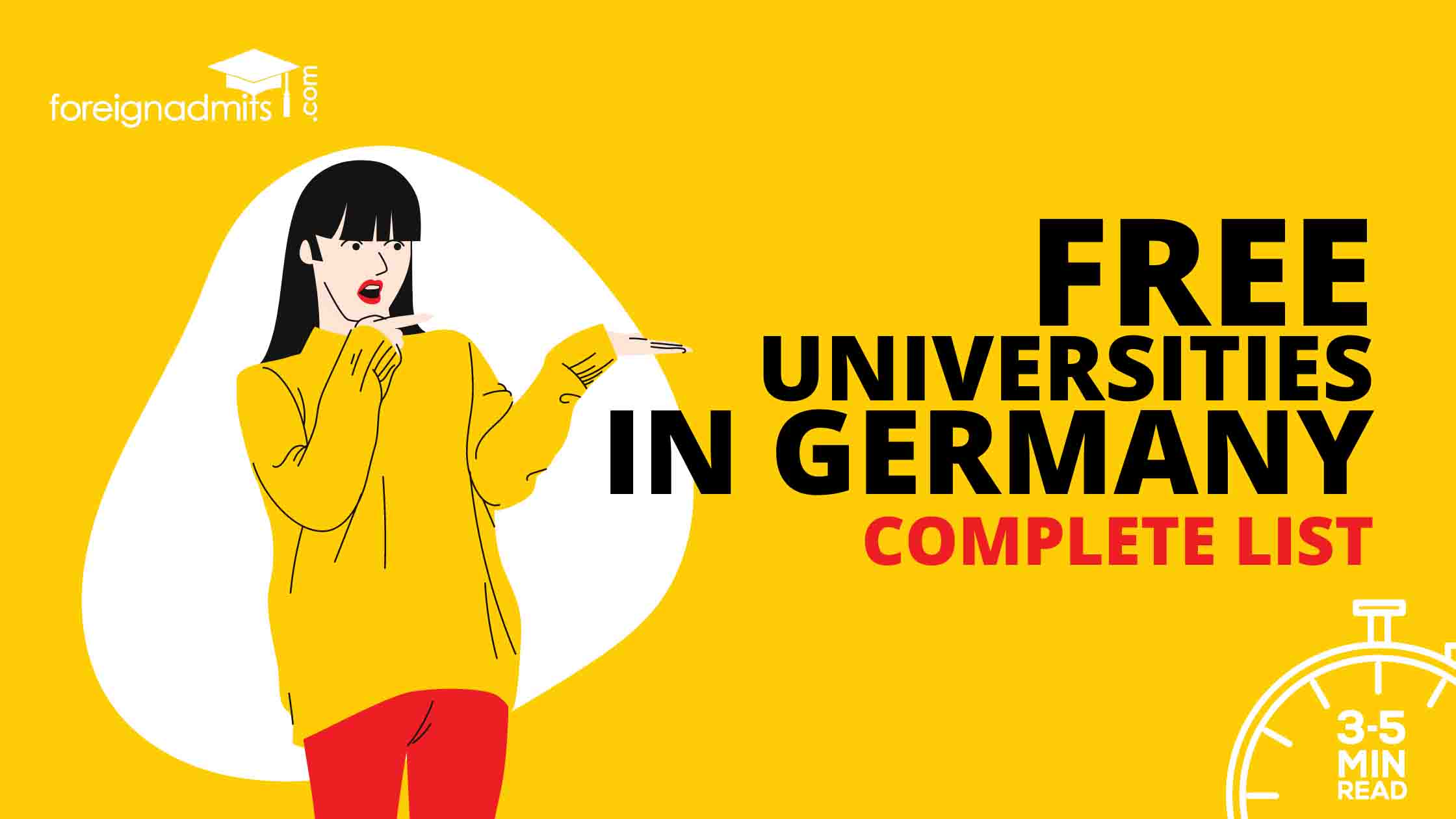 Germany is one of the best places to study abroad: it offers a rare mix of outstanding universities and a high standard of living and challenges other popular destinations, such as the United Kingdom and the Netherlands. And Germany is not just home to some of the world’s best universities – but home to free Universities in Germany too.

Who can study in Germany for free?

They will all train tuition-free in Germany! That is correct. Germans, Europeans, and all non-Europeans are free to study in Germany – without tuition fees. It does not matter if one is from the EU or the EEA.

This extends to nearly all public university research programs. There is a minor catch: if one is outside the EU before one arrives in the region, one will need to get a residency permit and finish your studies in Germany.

At which universities in Germany can one study for free?

Many of the major public colleges include:

Why do public universities in Germany not charge any tuition fees?

Universities charge tuition fees nearly anywhere in Europe and the world, if only for foreigners who come to that country for their studies. Germany is one of the few countries in Europe where you can study for free even though you are from Asia, Africa, or elsewhere.

Germans commonly agree that education cannot be viewed as a consumer good and that equal access to higher education guarantees economic prosperity and health for the larger public. In recent years, there has been reform that requires public colleges to charge minimal tuition fees of EUR 1,000 annually. But the tuition fees were scrapped again in 2014 following years of mass demonstrations. Today, a few exceptions remain where tuition fees can be paid by public universities.

In recent years, Germany’s governments have also acknowledged the economic and social advantages of immigrants. Germany needs to get the brightest minds to study in the nation and to stay and work after graduation, preferably. That is why there are still no general tuition fees for aliens.

If tuition is free, does that mean the universities are not very good?

The way from it! Germany’s colleges are among the best in the world and, as an international student, one should hope to obtain a world-class degree. In world rankings, many of the larger organizations consistently rate in the top 100.

One should still expect high-quality teaching, regardless of a university’s ranking. To accredit educational providers, Germany has very high requirements.

The fact that public university higher education is tuition-free is a solely political policy of the German government. A German university degree will be valued across the globe and open many doors to your career choices.

Are there any tuition fees in Germany?

Generally, one will study for free in Germany. But there are a couple of exceptions where one must pay tuition fees:

There are only tuition-free public colleges. One must pay if they study at one of the nearly 100 private colleges, and such tuition rates are online with what one will pay in countries such as the UK or Ireland. However, private colleges in Germany prefer to provide advanced services and other incentives because of their competition from inexpensive public universities, so that you get your money’s worth. And you may be considered for a scholarship, of course.

German colleges differentiate between Master’s programs that are ‘consecutive’ and ‘non-consecutive’. Consecutive degrees are ones that you can enrol in right after your Bachelor’s degree is finished. Typically, non-consecutive programs demand that applicants have job experience post-Bachelor. These non-consecutive research programs, also at public universities, typically pay tuition fees. They are relatively rare; “Executive MBAs” are common, but certain advanced Master’s programs are also typical.

Tuition fees for non-EU/EEA students have been paid by public universities in the state of Baden-Württemberg since 2017. This includes universities in the following cities: Stuttgart, Karlsruhe, Mannheim, Freiburg, and Heidelberg. The tuition fees are priced at EUR 1,500 a course, which is also much more manageable than in many other European countries.

When one already has a Master’s degree in another subject, enrol in a Master’s program.

How high are tuition fees in Baden-Württemberg?

These tuition fees apply to all public institutions of higher education in ‘BaWü,’ of which there are about 50.

Students who are EU nationals are treated in the same manner as German students, so no tuition fees are charged.

What other costs does one have to consider when studying in Germany?

“While there are usually no tuition fees at public universities, something called a “semester donation” or “administrative charge” must normally be paid.” But that’s a limited amount: for the entire semester, mostly about EUR 300 or 400. It then even involves a public transit pass, at a fraction of what you would usually pay for such a ticket, for the city and often also the nearby areas.

Germany is otherwise very inexpensive for a Western European region. A description of the typical cost of living as a student in Germany is available here:

What scholarships are available to study abroad in Germany?

In Germany, there are many scholarships for foreign students. The German Academic Exchange Service (DAAD) official scholarship website helps one scan for relevant scholarship choices, such as those focused on their country of birth.

Can one stay in Germany after they graduate from university?

Yes, foreign German university graduates can remain in Germany while they’re searching for a career. And that, irrespective of the country of birth, extends to all pupils. After graduation, one can apply for an 18-month residency permit if you are a resident of a country outside the European Union.

One will look for a position that suits your credentials for such a “job seeker visa” (or “post-study work visa”), and within those 18 months, you are permitted to take on every job. More details about the graduate residence permit are provided by the German Federal Government.

Thus, we hope we could clear your doubts about free Universities in Germany.

ForeignAdmits provides you with world-class mentors and counsellors from around the globe. Make full use of the opportunities coming your way and contact our mentors for expert opinion and professional help.